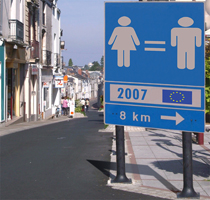 The European year of equal opportunities for all gets under way!

The German EU presidency is launching the European year of equal opportunities for all, on 30 and 31 January 2007, in Berlin.
This initiative aims to give momentum to the fight against discriminations in the EU, including those based on ethnic origin, religion, disability, age or sex.
Many activities will be organised in the 27 EU member states during the year. At EU level, the European Commission has launched a website dedicated to this issue. It will feature information on all activities organised during the year, surveys and studies on discrimination, as well as the European legislation on the issue.
The Council of European Municipalities and Regions (CEMR) too will take various initiatives on the issue of equal opportunites throughout 2007. These will mainly focus on the charter for equality of women and men in local life. Amongst others, CEMR will organise a seminar on the implementation of the charter in Rennes, on 22-23 March.
The charter for equality of women and men in local life was launched at CEMR's general assembly in Innsbruck on May 2006; it is addressed to the local and regional governments of Europe, who are invited to sign it, to make a formal public commitment, and to implement, within their territory, the commitments set out within the charter. Today, some 200 cities all around Europe have already signed the charter and hundreds of others are considering doing the same.
For our society to be truly based on equality, local and regional governments must give their policies, structures and actions full gender dimension. In today and tomorrow's world, genuine equality of women and men is the key to economic and social success, not only at European or national levels, but also in our regions, towns and communes, said Michael Haupl, CEMR president, on the issue of equal opportunities.
More information
- The European charter for equality of women and men in local life
- The interview of CEMR president, Michael Haupl, on the charter

- The website on the European year of equal opportunities for all