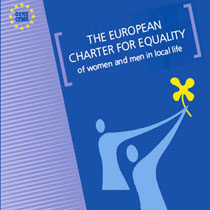 Michael Häupl : "CEMR charter is a first step towards equality of women and men in Europe"

Last September, the Council of European Municipalities and Regions presented its charter for equality of women in men in local life, at the European Parliament. CEMR president and mayor of Vienna, Michael Häupl, explains the genesis of the charter.

Through the charter, we wanted to encourage local and regional elected representatives to commit themselves publicly to implement the principles of the charter in their constituency. Why ?
Because for our society to be truly based on equality, local and regional governments must give their policies, structures and actions full gender dimension. Genuine equality of women and men is the key to economic and social success, not only at European or national levels, but also in our regions, towns and communes.

For over twenty years, CEMR has endeavoured to promote gender equality. Last year, we launched the 'A European town for equality" project. Its aim was to set up a methodology to create a town in which equality ruled. This has now become a model enabling local government to progress towards equal opportunities through various policies.

The charter itself is the continuation of that previous project. It is also the result of numerous and complex negotiations involving local and regional representatives - elected or not - and experts in the field.
What sorts of gender inequalities are there in Europe's towns and regions ?

Situations and contexts differ widely from, say, Sweden, to Spain or Ukraine for instance. Some countries have compulsory gender quotas for electoral lists, others do not favour them while others work towards these quotas. However, there are general trends: across Europe, women are more likely to be unemployed, they are under represented in the managerial circles of companies, and they earn on average 15% less than men.

Women are also under-represented in politics: only one mayor in ten is a woman, and only one councilor in four is a woman. Yet, local and regional governments deal with issues that have an impact on women's lives, such as transport, local administration, education, etc.
Is the principle of equality better implemented in certain parts of Europe ?

Generally, women are more involved in politics in the Nordic countries; however, progress still has to be made in these countries. Though the 'Scandinavian model" is often referred to, women in Northern Europe do not believe women/men equality has been achieved in their countries.

How can the charter be promoted across Europe ?

The promotion of the charter is made at the local and regional, national and European levels.

The charter itself was officially presented at CEMR's general assembly in Innsbruck, in May 2006, attended by over 1,200 local and regional representatives from 36 European countries.

CEMR members are best placed to promote it. I would urge them to do so, and to encourage their own members - towns and regions - to sign it and implement it. Local and regional governments can and must include gender equality in their daily work in issues such as housing, safety, public transport, the work environment, healthcare...

Of course, we also work with local, regional, national and international press, and with the European Commission, the European Parliament and the Council of Europe. Last September, we presented the charter to the chair of the Parliament's Committee for women's rights and equal opportunities, Anna Záborská, and her vice-chair, Edite Estrella. In June, we presented it to the Council of Europe.

Finally, the charter is on CEMR's website, and is available in French, English, German, Italian, Spanish, Basque, Portuguese, Greek, Romanian and Polish. It will be available in other languages soon; this will help spread it across Europe's towns.
Why would a municipality want to improve gender equality ?

First, because excluding women means marginalizing the majority of Europe's population in decision-making processes, and from social, cultural and civic life.

Second, because equal participation of women and men in local life is a basic principle of democracy and justice.

And lastly, for economic reasons: the employment rate of women is lower than men's; this means that a high proportion of Europe's workforce is not used when it could give Europe's economy a fresh boost. At the same time, being less employed than men makes women more vulnerable to poverty and social exclusion.
How can the charter be implemented in our towns and regions ?

It is rather simple: within two years of signing the charter, the local or regional government must set up and adopt an equality action plan. It must then implement it.

The action plan must include clear objectives and priorities, as well as measures to be adopted, resources to be allocated and a time-scale for implementation.

The signatory also commits her- or himself to take part in an adequate assessment process aiming to follow the progress made towards the implementation of the charter. There is also a commitment to help exchange experiences and best practice cases between local and regional governments across Europe.
However, I must stress that the charter is not a legally binding document; it should be seen as a 'roadmap", and we would be happy to see local governments implement it progressively.
Could a commune face some sort of penalties if it did not implement the charter's principles ?
Well, Article 4 states that the signatory, as the democratic representative of his or her commune or region, publicly and formally pledges to implement the principles of the charter. This is not a legal commitment, rather a public statement. Any signatory could find him- or herself publicly criticized in case (s)he does not hold that promise. Nobody relishes that prospect! This can help the charter becoming a reality, step by step.

Lastly, do not forget that each signature does not only commit the mayor or the president of the region : it commits the town or the region itself. In other words, if there is a new majority after (some) elections, the town or region is still bound to the charter.

How many towns and regions do you hope will sign the charter ?

In an ideal world, all of them, of course ! In reality, however, we cannot expect that 100% of them will adhere to its principles. At the end of October, over 100 towns and regions had signed the charter, including cities such as Vienna, Innsbruck, Le Havre, Nantes, Athens, Oulu, while Paris has initiated the legal process to sign it. Everyday we are contacted by municipalities interested in signing.

Yet, it is important to understand that the charter is not an end in itself, it is merely a tool. What matters is not how many towns sign it, but that local policies in favour of gender equality are implemented across Europe. In a few years, true woman-man equality will probably not be achieved, but Europe's towns and regions will have moved in the right direction.

After all, this is the charter's primary aim: to encourage local and regional governments to implement gender equality policies.