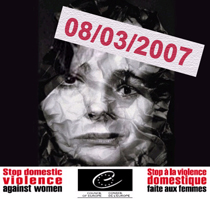 The Council of Europe dedicates the International Women's Day on 8 March to the campaign against domestic violence.
The Council of Europe's Congress of Local and Regional Authorities together with the city of Strasbourg.are organising an awareness campaign against domestic violence throughout Strasbourg, where the institution is based. This activity will be conducted as part of the Council of Europe's two-year campaign to combat domestic violence against women. The campaign is targeting the governmental, parliamentary and local/regional levels and includes the setting up of information points on the campaign in the local communities.
The Council of European Municipalities and Regions (CEMR) contributes to tackle "gender-based violence" too, through its European Charter for Equality of Women and Men in Local Life. The charter is aimed at the local and regional governments of Europe; it states that the signatory commits him/herself to establish and strengthen policies and actions against gender-based violence, including:
More information on...
the charter for equality of women in men in local life
the charter presented by CEMR president, Michael Häupl
The Council of Europe website