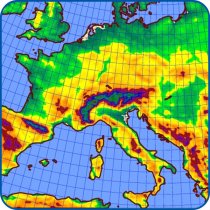 AI and local adaptation: an essential antidote to climate chaos

From automatic translation and the detection of cancer cells, to the promise of self-driving cars, artificial intelligence (AI) is already transforming work and processes in many areas of life. But this revolution, which will only intensify in the coming years, also concerns public services and, in particular, local and regional governments.

This is particularly true in the area of climate change adaptation, given that meteorological risks are as diverse as the patchwork of the world’s territories. That’s why CEMR held a political debate on AI and climate adaptation in Bologna on Monday (4 July), featuring national, regional and local political leaders, as well as academic and international experts.

Stefano Bonaccini, the president of CEMR and of the Emilia-Romagna Region, highlighted Bologna’s hosting of the supercomputers of the European Centre for Medium-Range Weather Forecasts (ECMWF). “This is a data centre for the entire European Union, containing some of the most powerful supercomputers in the continent”, he said. “By forecasting meteorological risks, the Centre contributes to shaping the most appropriate local and regional actions to adapt to an increasingly unstable climate.”

Such data will be sorely needed. European territories are increasingly being devastated by wildfires, floods and other extreme weather events. Andreas Wolter, the Mayor of Cologne, underlined that last year floods in Germany and Belgium killed almost 250 people and inflicted €20-40 billion in damages. The summer of 2021 was also the hottest on record in Europe, reaching 48.8 degrees Celsius in Sicily in August.

Patrizio Bianchi, the Italian Minister of Education, stressed the importance of AI and data to developing local, national and European responses to climate change and potential disasters. “We need data, data, data, and more data! And the capacity to elaborate on this data”, he said. “We are using this data to improve our capacity to live well and healthily, as well as to avoid war and disasters.”

Minister Bianchi stressed that Bologna’s data centre is one node in a pan-European system of climate simulations and that cooperation at all levels is key. He also emphasised that AI cannot substitute for human collective intelligence and civic responsibility: “The only real danger is human stupidity. We can avoid this by returning to the basic values of our democracies.”

Reports from the Intergovernmental Panel on Climate Change (IPCC) increasingly suggest that we will not achieve the Paris Agreement’s goal of limiting the global rise in temperatures to 2 degrees Celsius. As such, local climate adaptation will be necessary in addition to mitigation through reduced global emissions.

The European Union is taking numerous actions to anticipate and adapt to climate risks. These include the Copernicus Earth satellite observation programme, the Destination Earth digital model of our planet’s environmental system and a barrage of legislation and funding as part of the European Green Deal.

One European project particularly concerning local and regional governments is the Covenant of Mayors. The towns and regions making up the Covenant’s 11,000 signatories, covering 341 million inhabitants, all commit to taking measures to decarbonise their economies and proactively adapt to climate change.

The European Commission’s scientific body, the Joint Research Centre (JRC), regularly produces data-based studies on local climate risks and adaptation. These notably help identify the most coherent and effective actions to be undertaken in different localities, as well as flagging sometimes neglected issues such as social inequalities.

Enrico Biffis, Associate Professor of Actuarial Finance at Imperial College London, stressed the importance of data and accurate climate models to taking the most relevant local adaptation actions. “If we don’t get it right the costs are going to be huge. Some of these projects are multi-year, 10, 20, 30 years”, he said. “You cannot just backtrack 10 years down the line. It’s imperative to get it right.”

Mayors and other local and regional elected leaders shared their experiences and challenges regarding climate adaptation. Michaël Quernez, Mayor of Quimperlé, Vice-President of Brittany and Secretary General of CEMR’s French association (AFCCRE), cited the problems of climate data becoming privatised. “In France, for a mayor like me to access to data from Météo-France (a public weather forecaster), he must buy it”, he said. “What can we do to ensure this is public data and it is not marketized?”

This is just one of the issues that local and regional representatives can raise among national and European policymakers. One thing is for certain: we need accurate information and cooperation at all levels if Europeans are to fight and adapt to climate change.