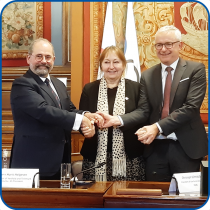 A new Presidency for European cities and regions

“I am driven by de facto local democracy!” These were the words of the new President of the Council of European Municipalities and Regions, Gunn Marit Helgesen, addressing CEMR’s Policy Committee members holding their constitutive meeting in Paris, on 5 and 6 December 2022.

Ms Helgesen is also Chair of the Norwegian Association of Local and Regional Authorities (KS) and member of Vestfold og Telemark County Council, located in the south-east of the country. She succeeds Stefano Bonaccini, President of our Italian association (AICCRE) and of the Emilia Romagna Region.

Commenting on her appointment, Gunn Marit Helgesen said: “Our network of local and regional authorities acts as a powerful driver to uphold the European values of freedom and democracy founded on local self-government, respect for the principle of subsidiarity and the participation of citizens.”

She continued: “Under my leadership, we will turn every stone to reverse the current trend of backsliding on earlier progress for women in society. We will also continue to influence EU legislation that affects not only its member countries but also EFTA countries, candidate countries and associate member countries”.

A new presidency for CEMR

CEMR's new Presidency is highly representative of Europe’s geographical and political diversity: 12 men and 10 women hailing from across the continent, east, west, north and south, including mayors, county leaders and regional presidents. Gunn Marit Helgesen will be flanked by two co-Presidents, namely Christoph Schnaudigel, President of the Karlsruhe Landkreis, and Philippe Laurent, Mayor of Sceaux.

The new Presidency and members of the Policy Committee will take forward CEMR’s work for the next three years, notably on gender equality, the green transition and democratic resilience, in particular against the backdrop of the war in Ukraine.

On that score, Anne Hidalgo, Mayor of Paris and CEMR's Executive President, called for increased mobilisation in support of Ukrainian mayors and councillors, with a view to rebuilding basic infrastructure and public services.

The Policy Committee also elected CEMR’s spokespersons on various topics, the members of the Financial Management Committee and our internal auditors. It was organised with the support of our French association, the AFCCRE, and hosted by the Cilty of Paris.

The next meeting will take place in Tbilisi, in June 2023.

Have a look at our photos of these two days: here.
Discover CEMR's new Presidency and spokespersons.