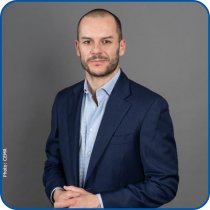 The CEMR is very pleased to welcome Fabrizio Rossi as its new Secretary General. Elected on 20 January 2022 by CEMR’s Policy Committee, Mr Rossi takes over from Frédéric Vallier. Speaking of his new position, Mr Rossi said: “I want to make a contribution to addressing the main challenges humankind is currently facing by working hand in hand with territories and local communities in Europe and across the world.”

As Secretary General, Mr Rossi will work on the whole range of issues faced by local governments and their citizens. “The challenges are great and plenty – building local solutions to current and future crises, promoting peace and security, decarbonising European territories and societies, reducing social inequality and many others”, he said.

A career in service of local governments and sustainability

Born and raised in Italy, Mr Rossi graduated with a bachelor’s degree in political science from the University of Cagliari, his hometown, and completed his education in Spain with a master’s degree in European and international cooperation from the Autonomous University of Barcelona.

Mr Rossi has a worked with local and regional governments across Europe throughout his career. After his studies, he became an EU affairs advisor for the Regional Parliament of Sardinia. A year later, working for the Barcelona Provincial Council, Mr Rossi took the leadership of Partenalia, a European association representing provincial authorities.

Besides his work with local governments, Mr Rossi has been a social entrepreneur active in environmental issues such as forest restoration and climate change. He founded a start-up focused on reforestation projects in Madagascar which later expanded to Bolivia.

Before joining CEMR, Mr Rossi was Innovation Orchestrator and Head of Programmes for the Land Use Area in Climate-KIC, the main climate innovation agency of the European Union. Prior to that, he worked for INTERACT, an EU-funded project facilitating cross-border cooperation across Europe.

Supporting Ukrainians in the face of Russia’s war

Mr Rossi’s term of office began in tragic circumstances with the launch of Russia’s war against Ukraine. One of his first decisions was to set up a taskforce with CEMR members to exchange and coordinate on how to best support Ukraine.

The taskforce is working on issues such as financial and logistical support to Ukrainian municipalities, the hosting of refugee and EU sanctions and the consequences for procurement and cooperation with Russian municipalities.

“In the face of this horrifying situation, we are prouder than ever of the work we have implemented so far together with our friends in Ukraine”, Mr. Rossi said. “Cooperation will not stop and we are getting ready to build new bridges to support the Ukrainian people.”