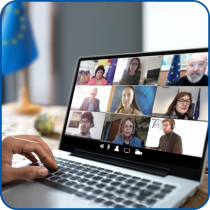 And that’s a wrap for the latest gathering of CEMR’s Policy Committee! Over 100 people came to Brussels or joined online to take part in the discussions of our highest decision-making body and set the agenda for local and regional Europe. You can see some memorable highlights from the debates under the hashtag #CEMRmeets.

A new secretary general for CEMR

Say hello to our new secretary general! Fabrizio Rossi has been elected for a six-year term of office at the head of the CEMR. He has extensive experience working with and on behalf of of local and regional governments, including for regional authorities in Sardinia, Barcelona and Scotland.

More recently, Fabrizio Rossi served as secretary general of Partenalia, an association representing counties at EU level, and worked at Climate-KIC, a leading EU climate innovation initiative. In the latter capacity, he managed a portfolio of multifunder programmes and projects contributing to achieving climate-neutral and resilient territories across Europe.

The Policy Committee debated and adopted several position papers which will serve as a basis for our advocacy on a wide range of issues important to local and regional governments. The papers, which will be uploaded to our website, cover the EU’s Fit for 55 decarbonisation plan, digitalisation, migration, EU economic governance, water regulation, mobility and the Conference on the Future of Europe.

What’s more CEMR’s 2022 Work Programme was amended and adopted (see here), outlining our planned activities and policy and legislative priorities for the year. We also presented CEMR’s strategy for externally-funded activities (EFAs), drafted by the secretariat together with several member associations. The strategy will help CEMR secure funding from the European Commission, donors and philanthropists, ultimately contributing to our advocacy, collaboration and knowledge-sharing.

Local leaders discussed CEMR’s brand-new report on ‘Territorial Governance, Powers and Reforms in Europe’, or TERRI Report for short. This unique online tool exposes the current state of local government systems in 40 countries and their evolution over the past decade, while also making recommendations for successful territorial reforms. This edition has a special focus on local health systems in light of the pandemic.

Presenting the report’s recommendations, Jan Van Zanen, the mayor of The Hague and the President of the Association of Dutch Municipalities (VNG), argued that territorial reforms devolving responsibilities must be accompanied by economic support. “In the Netherlands, we have faced massive decentralisation since 2015 in the social field, but the central government did not deliver adequate financial transfers”, he said.

Central Bedfordshire Councillor and Chairman of England’s Local Government Association, James Jamieson, said the TERRI Report showed the diversity of Europe’s systems of government and that decentralised countries tend to be more equal and more prosperous. “The pandemic demonstrated that local councils can deliver in a crisis”, he said. “But as we move towards recovery we need a strategic view on role local government can play in tackling challenges such as climate change, automation and an aging population.”

Debate on the Future of Europe

The Policy Committee proper was preceded by a debate on the Conference on the Future of Europe featuring mayors and senior regional, EU and national officals. Municipal leaders highlighted actions they are taking to involve ordinay citizens in this crucial event for the reform of the EU. Check out our highlights of the debate.

See you in Daejeon!

Last but not least, Emilia Saiz Carrancedo, the secretary general of UCLG, presented our global organisation’s upcoming World Congress in Daejeon, South Korea. This global summit of local and regional governments will take place between 10 and 14 October 2022.