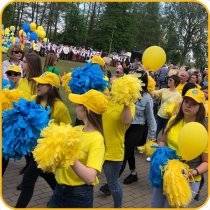 This was in early June, under a bright spring sun,  a delegation from Novohuyvinske visited Lazdijai district municipality on the occasion of “Cross border fiesta 2022” and held working meetings on cooperation with their future twin town.

During this year’s festival, solidarity with Ukraine was strongly emphasized. Not only did Lazdijai invite their Ukrainian partner municipalities, Novohuyvinske and Baranivka, to join them for these special days, the official procession was also dominated by the Ukrainian flags.

Tetiana Parfentiieva, Deputy Mayor of Novohuyvinske shared a few thoughts on the visit: “We felt a great support from our Lithuanian friends and appreciate that they provide shelter to our refugees. We have also exchanged best practices. In the Museum of Soviet Occupation, we got a glimpse of how they work with national memory. We visited an equestrian school, educational and cultural institutions, and learned about the tourist sector and its potential.”

Lazdijai district municipality was very quick to respond to the appeal for help in April and provided humanitarian aid to Novohuyvinske in the form of clothes, medicines, non-perishable foods and hygiene products.

Representatives of Novohuyvinske brought with them a photo exhibition about the destruction of Zhytomyr, a region west of Kyiv, by Russian bombs. The exhibition took place in the Cultural Center of Lazdijai district and was open to the public. Eleven foreign delegations were also able to see the photos.
​
One of the unexpected results of the visit was establishing contact with the Estonian town of Tõrva. After participating in the events of Lazdijai, representatives from Tõrva paid a visit to Novohuyvinske. They also took the photo exhibition with them to Estonia in order to bring even public attention to the destruction and the necessity to support Ukrainian municipalities during this difficult time.

The next step in the cooperation between Novohuyvinske and Lazdijai district will be a signature of a cooperation agreement in August. Following three online meetings, this visit has brought the partners closer together and paved the way for great cooperation between the two communities in areas such as local development, environmental protection and historical heritage.