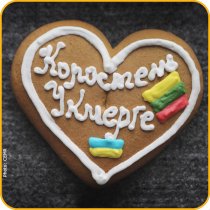 Bridges of Trust partner-municipalities, Ukmergė and Korosten, meet in person for the first time

On 27-29 May 2022, a delegation from Korosten traveled to Lithuania to visit their Bridges of Trust partner-municipality Ukmergè, on the occasion of the City Festival for the first time.

The two partner-municipalities first met online in October 2021, in the framework of the Bridges of Trust project, implemented by the CEMR, PLATFORMA and supported by the U-LEAD with Europe programme. If, study visits and internships were planned for spring and summer, the war changed this. At the same time, the difficult situation in Ukraine and in Korosten brought the two partners closer.  Ukmergė was among the first to send humanitarian aid to the people and internally displaced in Korosten. In April, the two municipalities also signed a partnership agreement.

In order to thank Ukmergė for their support, the delegation from Korosten travelled 1020 km. The delegation included: Natalia Chizhevska, deputy mayor, Volodymyr Stuzhuk, head of the Economic Department, Mykola Zayets, head of the Health Department and Leonid Yakubovsky, head of the Communal service agency.

Deputy mayor, Natalia Chuzevska, shared her impressions from the visit:

“What I saw in Lithuania struck me to the heart: Ukraine's support is felt not at every step, but at every breath. Ordinary people are learning Ukrainian, young people listen to Ukrainian music and sing Ukrainian songs, women wear jewelry with Ukrainian symbols, flags of Ukraine are installed at all institutions along with the flag of Lithuania and the European Union. Excellent living conditions have been created for refugees from Ukraine.

People of Ukmergė are also closely following the events in our Korosten through Korostenmedia, reading and watching the news from our community very closely.”

During the visit, the delegation also visited different educational and medical institutions and they hoped to be able to bring some of the best practices from Ukmergė to Korosten. This will be especially important in the reconstruction of some of the buildings that have been destroyed or damaged by Russian shelling.

The cooperation continues and this Lithuanian-Ukrainian partnership is an excellent example and testament to the importance of international municipal cooperation.