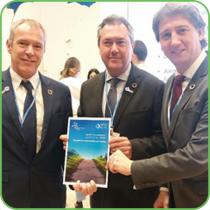 At COP25, cities and regions again showed their leadership in climate action through participation in the Climate Ambition Alliance.

Based on a disappointing final result from this year’s United Nations climate negotiations, the Local Governments and Municipal Authorities (LGMA) Constituency called for increased climate ambition and action by national governments, including the full engagement of local and regional governments in the preparation of the second NDCs at home throughout the year on the road to the 26th meeting of the Convention of the Parties on Climate Change (COP26), in Glasgow in 2020.

“Multilevel and collaborative climate action should be the new normal in every community and in every country in the era of the Paris Agreement. This is why the Constituency is calling on COP26 to be the ‘Multilevel Action COP,’” said Gino Van Begin, Secretary General for ICLEI – Local Governments for Sustainability, which serves as the focal point of the LGMA. “More ambitious climate action can only be achieved through collaboration with and support of local and regional governments.”

The key priorities are:

This press release was originally published by the Local Governments and Municipal Cuthorities Constituency. You can read the full text here.

Traduire
On 11 December, as part of the Climate Summit (COP 25), CEMR participated to FEMP's High-Level Dialogue of Local Governments on Climate. Read the summary on UCLG's website.