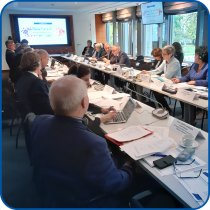 Meeting on the margins of CEMR’s annual retreat, our Executive Bureau adopted today a Resolution calling for strong cohesion policy in the EU’s next multiannual financial framework (MFF). The EU’s budget framework for the years 2021-2027 is currently the object of intense negotiations between national governments in the EU Council.

The Resolution emphasises the following three points:
The Finnish EU presidency presented a plan last month to cut cohesion policy by €12 billion, a proposal which is strongly opposed by CEMR. In contrast, the European Parliament voted in March 2019 to maintain the cohesion budget at the current level for the next seven years.

The Executive Bureau also discussed the changeover in leadership of United Cities and Local Governments (UCLG), to take place in Durban, from 11 to 15 November, at the occasion of UCLG World Congress.

The next gathering will take place in Orleans on January 23-24 with a meeting of the CEMR’s Policy Committee.