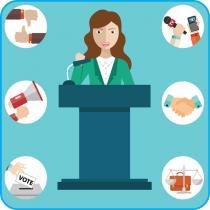 Despite some gains in recent elections, women remain heavily under-represented in politics - at all levels. As we celebrate International Women’s Day, let’s examine the evidence and identify potential avenues for future action.

The facts stand, and they are appalling. Despite some countries adopting laws to increase parity, currently, only three EU member states have a woman as head of government, and only one third of the Members of the European Parliament are women.

As for Europe’s local politicians, over the last 10 years, the share of elected women has shifted from 27 to 30%. As an elected representative, I have to say it: Europe deserves better. This lack of representation cannot stand.

Women are a majority among citizens. They are a minority among elected representatives. This unacceptable fact is shown clearly in a recent study led by the Council of European Municipalities and Regions (CEMR), which provides deep and disturbing insight into the political representation of women, be it at local, regional, national or even European level.

This profoundly unequal state of affairs may have seemed clear to you before the study. But now that we have the numbers on paper, nobody can deny the facts. In particular, Europe’s political parties cannot deny the reality of this inequality.

That is why, in the name of Europe’s local and regional leaders and their representative associations, we have launched the #Power2Her campaign for women’s political empowerment. Therefore, ahead of the EU elections in May, I am calling on political parties to run women candidates and to support them!

In many regions and cities such as Umbria, Madrid, Paris, Bucharest or Sofia, a woman in power is a reality. In fact, 8 capital cities in the EU have a woman mayor. It’s high time for that reality to take shape across Europe.

Why does the representation of women matter? Because equality is a fundamental right. Because democracy matters. Because a fair distribution of power matters. And because in Europe, we believe little girls have just as much the right as little boys do to dream of becoming president, prime minister or mayor. Role models cannot only be male.

But we cannot simply rely on wishful thinking. According to the World Economic Forum’s 2018 report, the most challenging gender gaps are in political and economic empowerment. At the current rate, it would take 107 and 202 years to overcome these gaps. Just like the United Nation’s Sustainable Development Goals say, we must take action.

History has shown that too little will change if the laws don’t change. In countries where equality laws have been established, things have changed at a fast pace. Just take France, for instance.
Since 2013, the law establishes that male and female candidates appear alternately on party lists, known as the "zipper system", so that women do not all end up at the bottom of the lists.

The result is striking: as the CEMR study teaches us, in the 2008 departmental elections, only 13% of elected representatives were women. In 2018, the proportion of women rose to 50%!
But we can all act in our own way. At CEMR, similar rules apply to our main decision-making body, allowing us to reach equal representation.

As an elected representative, I believe societies are better managed when women and men work together to find solutions for their constituents. Both deserve real equal rights, as is enshrined in the Universal Declaration of Human Rights.

For the next elections, parties will have the opportunity to either change or maintain the current political structure. Let’s change the power paradigm. For democracy’s sake: Europe needs more women to run for election!


Stefano Bonaccini, President of Emilia Romagna (IT) and of the Council of European Municipalities and Regions (CEMR).