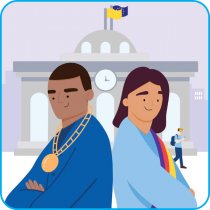 Women make up half of humanity, yet account for only 1/3 of political decision-makers in Europe and around 15% of mayors. A new study by the Council of European Municipalities and Regions (CEMR) shows that despite some gains, politics remains a man’s world.

One-of-a-kind, “Women in Politics: Local and European Trends” provides in-depth analysis of women’s representation in 41 European countries and all levels of government, from local councils all the way up to the European Parliament.

Covering a ten-year period, the study breaks down the data by country, shows where and how women have made gains and provides recommendations on how to make further progress.

Women making gains but remain underrepresented at every level

Although women remain underrepresented, gains have been made in local councils. The proportion of women local representatives has increased from 23.4% in 2008 to 29% in 2019. The situation varies significantly from country to country. The proportion of women local councillors ranges from 10.7% in Turkey to 47.2% in Iceland. Furthermore, only 8 of 41 European capitals are led by women mayors.

For countries with regional assemblies, there is similar variation, from 13.9% women regional representatives in Slovakia to 49% in France, where quotas have been in
place since 2000.

Pipi-Liis Siemann, Governor of Türi (Estonia) and member of CEMR Standing Committee for Equality said: “How many years do we still need before a 50-50 gender balance is achieved in European politics? This study shows that while we are moving forward, overall progress remains slow. Europeans deserve better and the world expects more.”

The average proportion of women in national parliaments increased from 21.9% in 2009 to 28.5% in 2019. The share in the European Parliament has steadily increased over the years from 15% in 1979 to 40% in 2019. However, women are not equally-represented across political groups, with some falling under the 35%.

Quotas are crucial, but not a panacea

The overall analysis of women’s participation in politics attests to the effectiveness of quotas and other proactive measures. Between 2008 and 2019, the fourteen countries  which have instituted mandatory quotas saw the proportion local female representatives rise from 22.8% to 31.5%, an 8.7 percentage point increase.

By contrast, the other countries surveyed without such quotas saw only a 4-point increase over the same time period. Quotas have also proven their effectiveness in advancing gender equality within European organisations. In CEMR, we adopted quotas in 2013 and we can proudly say that we now have equal representation within our main governing bodies.

“Quotas are not enough. Women face structural challenges and deeply rooted prejudices. More robust measures need to be taken by political parties, all levels of governments and civil society,” says Emil Broberg, Chair of the CEMR Standing Committee for Equality and Councillor of the region of Östergötland (Sweden).

This is why all stakeholders should raise awareness about the real state of gender inequalities. Funding and political support for training and mentoring programmes for aspiring female leaders should also be provided. Political parties should commit to achieving gender parity concerning their own electoral lists, candidates and elected officials.

As of today, it is difficult to access data related to women’s political representation at subnational level across Europe. “We can’t stay in the dark on gender equality. How can we achieve women’s equal representation in politics if there is no data to track progress? The collection and analysis of sex-disaggregated data must be a part of von der Leyen’s future EU strategy on gender equality,” said Mariana Gâju, CEMR vice-president and mayor of Cumpăna.

The incoming European Commission President, Ursula von der Leyen, has made very clear her commitment to equality, starting with her own Commission team. The EU has also committed to implementing the UN Sustainable Development Goals, of which gender equality is a major objective.

With the start of a new EU term, there is no better time to shine a spotlight on this issue at European level. Gender equality must be central in defining the priorities for the next seven years and the future multiannual financial framework.