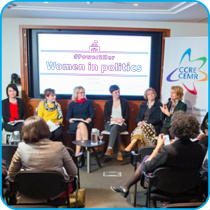 Did you know that only 16% of Europe’s mayors are women? And that only 8 European capitals have a woman mayor?

The new CEMR study, “Women in politics” is one of a kind: it provides deep and disturbing insight into the political representation of women, at all levels of governance - local, regional, national and European - between 2008 and 2018.

With this study, CEMR is calling out a blatant inequality: over the past ten years, the number of women mayors and municipal councillors only rose from 13% to 16% . The same applies to the national level: women’s representation in national parliaments has only increased from 25% to 29% since 2008.

“While women are a majority among citizens, they are a minority among elected politicians. Europe needs more women to run for election to make our representative democracies a reality,” stated CEMR spokesperson for Equality and Councillor of Östergötland (SE), Emil Broberg, when presenting the first results of the study at the #Power2Her event.

This event was co-organised by CEMR and the European Women’s Lobby on 6 March in Brussels.

Political parties must run women candidates for the next EU elections At the European level, only one third of Members of the European Parliament are women. “This is why we are launching the #Power2Her campaign. Ahead of the European elections in May, I am calling on political parties to run women candidates and to support them,” declared Broberg.

As the European Parliament has the power to reject Commissioners, women MEPs of all parties could push for a higher representation of women in the Commission.

Experience shows that real evolution can only happen with laws. In France, for instance, since 2013, the law establishes that male and female candidates appear alternately on party lists. As a result, while in the 2008 departmental elections, only 13% of elected representatives were women, this figure climbed to 50% in 2018.

Expressing her thoughts on the parity laws, Senior Policy and Advocacy Coordinator at the European Women’s Lobby, Mary Collins, said: “We believe that quotas are important for us to achieve a gender equal European Union and we hope the next Parliament will address this issue.”

“Over the last 10 years, evolution has been very slow. If we keep on this path, it will take a century before our societies reach equality in politics! Can we afford to wait that long if we want to achieve efficiency in governance? This can only be reached by diversity in society and to reach the UN Global Goal on equality by 2030!” stated Frederic Vallier, Secretary general of CEMR.

Translate
About “Women in politics”

The CEMR study covers ten years of development (2008-2018) on women’s representation at local, regional and national level in 29 countries. This document unveils the first results, and an update with new data will be released after the European elections. The final version of the study is to be published in September 2019.