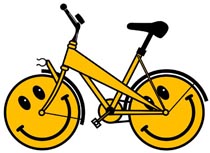 The capital city of Denmark has launched a campaign to increase the use of bikes on its streets. One of its targets is that more than one third of its commuters travel by bike to their workplace, by 2012. An annual advertising campaign is one means to reach this aim.
The city has allocated one third of the municipal budget for road construction (more or less 2.5 million euros) for the improvement of cycling conditions. The cycle track network will be extended, the cycle track maintenance upgraded, bicycle parking created and cycle safety improved.
By the end of 2012, the city hopes to have fulfil all its objectives:
- An increase from 33% to 40% of the numbers of commuters cycling to workplaces
- A decrease of half of the cyclist risk of being injured or killed compared to 2000
- A raise from 60% to 80% of the proportion of Copenhagen cyclists who feel secure in town
- An increase by 10 % of average travelling speed on trips of over 5km
- Cycle track surfaces registered as unsatisfactory not exceeding 5%