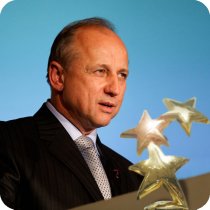 The annual Golden stars award ceremony took place in Brussels on 13 November 2008.
The projects that we are awarding the Golden Stars to demonstrate that Europe has been constructed for its citizens-and it is Europe's citizens that will make the difference, said EU Commissioner Education, training, culture and youth, Ján Figel. The EU is more than being about business and economy; we need to develop more its human side. I am convinced that more civic participation will take Europe further and develop it into something even more human.
Twelve projects from 22 Member States received the Golden stars award for their important work in promoting Active European Citizenship at local, regional, national or European level, using innovative methods and/or producing tangible results in terms of civic participation.
The Council of European Municipalities and Regions (CEMR) was on the jury awarding the Golden Stars. The president of CEMR's Twinning network, Janusz Marszalek told participants that as the mayor of the Polish town of Oœwiêcim, a town which in 1939, following a decree by Hitler, received the terrifying name of AUSCHWITZ, I am well aware of the essence and significance of building peaceful relations between nations and building a united Europe through partnership. My town has been putting this idea into effect also within the framework of the International Association of Peace Messenger Cities.
Refering to CEMR's seminar on local and regional governments in South East Europe (6-7 November 2008) Janusz Marszalek added : CEMR relishes the prospect of seeing these countries (from South East Europe) participate in the twinning programme at last. The representatives from these countries insisted in Vienna on the impact and significance of town twinning in the reconstruction and peace process as well as on its role in strengthening a sense of belonging to Europe and the building of a common identity with respect for diversity.
The Golden Stars award ceremony coincided with the launch of CEMR's new twinning website in 21 languages.
The winners of the 2008 Golden Stars
The European Commission's DG Education, culture, training and youth