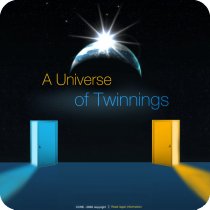 The Council of European Municipalities and Regions (CEMR) will launch its new multilingual website totally devoted to town twinning, on 13 November 2008 in Brussels.

The new website will help Europe's local governments find twinning partners and will feature over 20 languages including Ukrainian, Icelandic, Latvian, Greek, Romanian, French, English, German, Spanish, Portuguese... It will boast an elaborate online form enabling municipalities to post 'seeking a partner" requests that will be instantly available in all of the languages.

Example: A Portuguese mayor will be able to fill in the Portuguese form presenting his/her municipality. Once completed and validated, the form will be immediately available in all languages, enabling municipalities from almost all other European countries to read it in their mother tongue.
What is twinning? Who can help...?
CEMR's new website also features an 'information about twinning" part endeavouring to answer all questions that anyone interested in twinning might have: What is the definition of twinning? What is its purpose? Where to find funding? Who can advise...? It will also include a rubric with concrete tips for a successful twinning as well as news about twinning and examples of successful twinnings.

What is the point of twinning in the 21st century ?
The launch of CEMR's new website will also be the occasion to debate the future of twinning in Europe. In the age of Internet, satellite TV and cheap and fast travel, why is town twinning still relevant? What does twinning concretely bring to local authorities and their inhabitants? CEMR secretary general Jeremy Smith and CEMR head of citizenship Sandra Ceciarini will answer questions from the floor.
Background: CEMR developed the concept of twinning as a structured movement in 1951 and has ever since been its main driving force. Twinning is not limited to EU Member States, it is open to any European country, whether candidate country or not. Today, there are over 17,000 twinning links in Europe.

A number of PCs will be available to explore the new website.

Jeremy Smith and Sandra Ceciarini will be available for interviews in English, French and Italian

Registration: Due to the limited space, we strongly encourage you to register (via email: Pierre Vander Auwera; Patrizio Fiorilli)