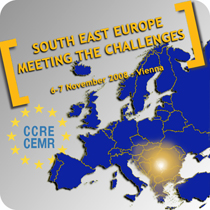 Over 100 representatives of local governments and associations from over 20 countries attended the 'South-East Europe - Meeting the challenges" conference, on 6-7 November 2008 in Vienna.

The conference was organised.by the Council of European Municipalities and Regions (CEMR) with the support of the Austrian Städtebund and NALAS (Network of Associations of Local Authorities of South-East Europe). It addressed a range of priority issues for local government in South-East Europe, such as municipal finances, urban planning, energy and the environment, twinning and preparations for EU accession.

A final declaration was unanimously adopted stressing the participants' commitment to 'building stronger links with and between local and regional governments in the countries of South-East Europe, enabling the exchange of experience and good practice" since these 'constitute the necessary and vital path to overcoming past differences".

It also stresses that the process of EU integration and reunification must proceed. It calls on the EU institutions to pay more attention to the key role of local and regional authorities in this process.

Furthermore, the final declaration calls for granting more competences to local authorities in South-East Europe, especially in areas such as transport, education, health and social services.

CEMR president and mayor of Vienna Michael Häupl called on the EU to better understand the needs of local government. The best way to make our voice heard, he said, is to cooperate through CEMR in order to have Europe's local and regional government to speak with one voice. CEMR is no lobbyist driven by selfish or private interest: we speak on behalf of our citizens, of our towns and regions.

Jos Chabert, on behalf of the Committee of the Regions expressed his fears that EU accession of Balkan countries become a more distant prospect; however Hannes Swoboda, vice-chair of the European Parliament's delegation for south-east Europe stressed that the integration process must be pursued thoroughly. There are obstacles to EU accession, but local authorities can help tackle some of them such as corruption or the Roma issue.
Former High Representative for Bosnia and Herzegovina Wolfgang Petritsch also stressed the importance of focusing on EU accession: To talk about the future is to talk about EU accession, he explained; your local governments must make sure that this is not a top-down approach since most issues linked to EU accession have an important local dimension: the return of refugees, reconstruction, climate change, good governance...

The European Charter of local self-government is the cornerstone of local democracy, said the President of the Chamber of regions of the Congress of Local and Regional Authorities Ludmila Sfirloaga, while stressing the need to embrace further areas such as the Caucasus and the Black Sea countries. The president of NALAS Tarzan Milosevic identified decentralization and urbanization as the main tasks facing local governments in that part of Europe.

Representatives from South-East Europe local governments had the opportunity to describe what pressing issues they were facing. Most speakers identified finances as the key issue: most local authorities are under-funded while the bulk of their financial resources 'comes from above". Granting local authorities more financial and fiscal freedom would help them tacke other key local issues such as urban planning and public services.

The representative of Sarajevo stated that 95% of the population in need never approaches the local, regional or national levels since 'nobody is a position to help due to overlapping competences and structures". The representative of Chisinau, Moldova, explained that : yesterday, the main heat provider in Chisinau was shut down, leaving most schools and hospitals without any heating. In other words, the central government uses energy as a weapon against local government.
The deputy mayor of Ljubljana stressed the importance of the role of capital cities in Europe, and all participants identified town twinning both as the best way for local authorities to learn from each other, and to bring towns and their citizens closer to each other. They also congratulated CEMR for its new twinning website in over 20 languages (that will be launched on 13 November in Brussels).

Local governments in South-East Europe will also feature as one of the topics at the general assembly of the Council of European Municipalities and Regions (CEMR) in Malmö, from 22 to 24 April 2009.