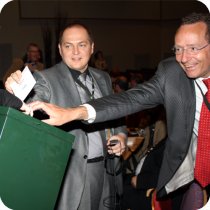 The policy committee of the Council of European Municipalities and Regions (CEMR) met ahead of the opening of CEMR's General Assembly in Malmö, on 22 April 2009.

More than 100 representatives of local and regional government from all over Europe voted to decide on the next host city of CEMR's General Assembly. Two cities, Athens and Cadiz, were still in the running. The majority of the members of the policy committee have expressed their support for the capital of the province of Cadiz, in Andalusia (Spain).

CEMR also presented its Manifesto for the elections to the European Parliament, aimed at local and regional governments. It consists of a list of key issues for local and regional authorities, ranging from public services to sustainable development to the economic crisis and social inclusion, and urges political parties to address these issues.
Finally, members discussed the final declaration of the general assembly to be adopted at the end of the general assembly on 24 April.
Translate