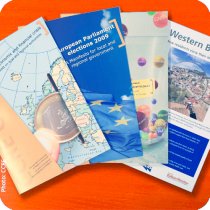 The Council of European Municipalities and Regions has launched three studies and a manifesto for the European elections, at the occasion of its general assembly in Malmö, from 22 to 24 April 2009.
The manifesto for the elections to the European Parliament is aimed at local and regional governments as well as the European Parliament. It consists of a list of key issues for local and regional authorities, ranging from public services to sustainable development to the economic crisis and social inclusion, and urges political parties to address these issues.
Two new studies were also presented at Malmö. The first one aims to assess the impact of the economic crisis on local and regional authorities. It was drawn up by CEMR's national associations. The second one on changes in local and regional structures across Europe gives an overall view of the current situation in local and regional structures across Europe. It is available in English and French.
Finally, CEMR will publish a report to be released towards the end of the year and focusing on how Western Balkans citizens view their local authorities. The publication will also examine changes in how various aspects of life are perceived in the region over time. The study is a joint effort between GALLUP Europe, NALAS and CEMR.
Translate