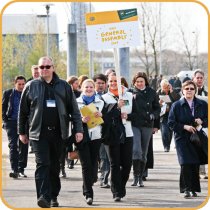 CEMR's general assembly: A Resolution for the future

Over 1,000 representatives of European local and regional authorities have adopted the final declaration and the resolution at the end of CEMR's general assembly, on 24 April 2009 in Malmö.
The Final Declaration puts forward some core principles about the direction we want Europe to take. Amongst these are the need to reinforce the European Union in all its dimensions, and in particular to confront the economic and social crisis; it also stresses the need to guard against the risk that individual governments look to protect their own citizens no matter the cost to others.
Tackling the crisis
The economic and financial crisis features prominently in the Malmö Resolution. CEMR and its members underline that membership to the eurozone has been of positive benefit for those countries of the zone zhich have experienced special difficulties. They also believe that local and regional governments are uniquely placed to play a key role in the implementation of economic stimulus and recovery programmes. Therefore, CEMR and its members call on the European Institutions, the European Council and the national governments to channel a much greater amount of investment under current and future economic recovery programmes through local and regional governments. They also ask the European Institutions and Member States to provide greater flexibility to ensure that the State Aid rules and structural funds can be used more simply and creatively.
The Resolution also calls on national governments to involve their towns and regions as partners in tackling the crisis, in particular by protecting the financial base and the resources of local and regional governments.
Cohesion policy and territorial cohesion
As the debate on the future of the EU's financial framework is about to start, the Resolution welcomes the new focus on the concept of territorial cohesion (integrated development of a region or town). It also states that the current division of responsibility (between urban and rural areas) within the EU Commission does not lead to the best results, and that urban and rural policy and funding need to be better coordinated and integrated.
The Resolution aims to put forward Europe's local and regional governments' views on the broadest range of issues relevant to our towns and regions: climate change, demographic change, international challenges and gender equality.
The final declaration and resolution are available in EN - FR - D - IT - ES
Translate