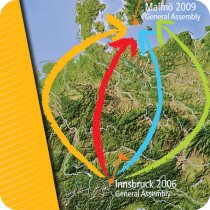 Some 900 people have registered to take part in CEMR's general assembly in Malmö, between 22 and 24 April 2009.
The final programme features prominent speakers from different backgrounds:
Former CEMR president and chair of the Convention on the future of Europe Valéry Giscard d'Estaing will address delegates in the opening session on 22 April. His contribution will focus on the future of the European Union in the light of the economic and financial crisis and the recent institutional developments (including the Lisbon Treaty).
The vice president of the European Investment Bank (EIB) Eva Srejber, also in the opening session, will address the role of the EIB in relation to the crisis and how the Bank is helping local and regional authorities tackle the worst effects of the economic crisis.
The mayor of Reykjavik Hanna Birna Kristjansdottir will explain how her city, once one of the richest in Europe, is now in the grip of one of the worst crises in its history, and what measures have been taken.
The chair of Gallup Europe Robert Manchin, drawing inspiration from Gallup's latest surveys in Europe's local and regional authorities, will give delegates an overall picture of how citizens assess the towns and regions they live in.
Jeremy Rifkin was among a handful of economists who forecast the current financial crisis in a number of articles. At CEMR's general assembly, he will advise participants on actions that should be taken to address the triple threat of the global financial crisis, energy crisis, and climate change. He will argue that all three crises are interwoven and are feeding off of each other, creating a perfect storm. He is expected to call for a third industrial revolution with the view of remaking the globalization process along more sustainable lines.
New local and regional charters and studies
The Council of European Municipalities and Regions will use its general assembly as a platform to launch several initiatives. Amongst these feature a new European Charter on local and regional services of general interest. The charter stresses, amongst others, that local and regional authorities must be free to decide without unjustified restrictions at European level how to deliver public services to their citizens.
CEMR will also present its Manifesto for the elections to the European Parliament, aimed at local and regional governments. It consists of a list of key issues for local and regional authorities, ranging from public services to sustainable development to the economic crisis and social inclusion, and urges political parties to address these issues.
Two new studies will be presented at Malmö; one on the impact of the economic crisis on local and regional authorities, drawn up by CEMR's national associations, and another one on changes in local and regional structures across Europe.

Finally, CEMR will also present a summary of a study to be released towards the end of the year and focusing on how Western Balkans citizens view their local authorities. The study is a joint effort between GALLUP Europe, NALAS and CEMR.
CEMR general assembly programme in English - FR - D - IT - ES - PT - EL (Please note that the programme is a heavy document and can take a few seconds to open).
CEMR's general assembly website