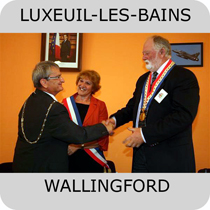 The twinning between the French town of Luxeuil-les-Bains and its English counterpart of Wallingford is back on track!
The breakdown of their 30 years twinning link between the two towns hit the headlines worldwide last April as the mayor of Wallingford was quoted as saying that he did not know how to "un-twin".
However, last September, he traveled to Luxeuil to meet local leaders with the view to starting their relationship afresh. The former mayor of Wallingford apologised for having used the word "divorce" and the mayor of Luxeuil apologised for having left their twinning link come to a standstill.
Both towns have committed themselves to re-establish their twinning committees and to launch initiatives such as links between primary schools and sporting exchanges.
See previous episodes
Wallingford's website - Luxeuil-les-Bains' website