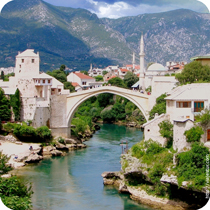 Twinning is a way to avoid repeating mistakes of the past

The Council of European Municipalities and Regions (CEMR) organised a seminar that looked at the tie between reconciliation and town twinning, in Oswiecim (Poland), on 30 October 2009.
Three round tables brought together representatives from local government and the European Commission to discuss town twinning achievements, 70 years after World War II broke out, and 20 years after of the fall of the Iron Curtain.
The first round table was about the role of town twinning in the reconciliation process in the wake of the Second World War. As representative of a French-German twinning link, deputy mayor of Brest, Reza Salami, underlined how the links tied after the war now play an important role in building a Europe based on solidarity and citizenship. Lessons should also be learnt from the war in the former Yugoslavia. In his speech, the mayor of Mostar, Ljubo Beslic, said: "Mostar was a great example of co-existence. But it suffered hard times, from 1992 until 1995. All the dialogues among people who live there have been interrupted... I am pleased that the countries of Western Balkan now have a chance to participate in European twinning programmes.", he added.
The second debate focused on the contribution of twinning links in bringing Europeans together 20 years after the victory of Solidarnosc and the fall of the Wall. The Executive Director of the Association of Polish Cities, Andrzej Porawski, gave his testimony as an actor of the Solidarnosc movement and local elected representative from Poznan in 1990. "Europe has two lungs [countries from Western Europe and former soviet block countries] that must breathe together for the life of the being. Common European values such as solidarity must continue to foster exchanges between cities and citizens." The twinning link between the Latvian town of Valka and Valga in Estonia separated by the Estonian/Latvian border but using the slogan "One Town, Two States" was also presented.
"All twinning links between towns are partnerships, but partnerships are not all twinnings links". This is what Jan Olbrycht, Member of the European Parliament, asserted at the third round table on 'Reconciliation in Europe today". Town twinning represents a long-term commitment between towns and cities, not a short-term project partnership. The representative of the European Commission, Pavel Tychtl, underlined the role of twinning in today's Europe. He gave his personal experience on twinning as a tool to bring European citizens together in spite of the borders that the States can draw.
Other speakers included the Mayor of Ramla (Israël), Yoel Lavi; the Mayor of Goldap (Poland), Marek Miros; as well as representatives from Stuttgart (Germany), Frédéric Stephan and from the CEMR Swiss section (ASCCRE), Reinhard Stahel.
The event was hosted by the mayor of Oswiecim, chair of CEMR's twinning group, Janusz Marszalek, in partnership with the Association of Polish Cities.
CEMR twinning website
Town twinning and CEMR