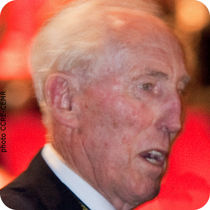 The need to revitalise town twinning was the recurrent theme of speeches at the national meeting on twinning and partnerships, held in Tours on 11 and 12 September 2009. The event was organised by CEMR's French association (AFCCRE).
From the opening, speakers seemed to speak with one voice with AFCCRE president Louis Le Pensec stating that rarely has the gap between the EU and its citizens been so wide, however town twinning can help narrow that gap... provided twinning is modernised. The French Minister for European Affairs Pierre Lelouche also spoke of the need to make twinning more dynamic.
The need to find a way to make twinning fit for the 21st century was visibly on everybody's mind; CEMR secretary general Jeremy Smith spoke of the need to renew the concept of town twinning: What we need is twinning partnerships on practical, concrete themes, more flexible twinnings within the EU but also with partners in the neighborhood of the EU and elsewhere in the world.
In all, over 400 local representatives attended the meeting and adopted the Tours final declaration (in French).
CEMR's "100% twinning" website, in 23 languages