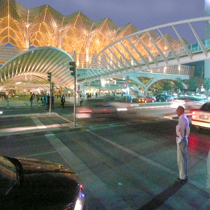 The Committee of the Regions (CoR) is organising a Forum 'Cities of the future" on sustainable urban development in Brussels on 8-10 April 2008.

The Forum will highlight the challenges that European towns and cities are facing in the field of sustainable urban development, concerning for example energy, mobility, transport and housing. It will also showcase local initiatives that have already been successfully implemented to combine economic growth and sustainability.

EU Commissioner for Energy Andris Piebalgs will present the 'Covenant of Mayors" - a tool to make cities sustainable. This initiative was launched by the European Commission in January 2008 with the intention of mobilising mayors and leaders of Europe's cities and towns, giving them the opportunity to go beyond the objectives in the field of sustainable energy adopted on 9 March 2007 by the EU's heads of state and government.

The forum is organised in cooperation with the European Commission's Directorates General for Energy and Transport and for Enterprise and Industry, and in partnership with Eurocities. The -Cities of the Future' Forum will be held alongside the next CoR plenary session on 9 and 10 April.
Programme and registration