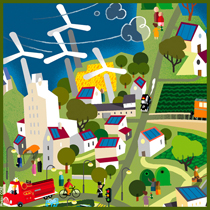 Consultation on the Covenant of Mayors for energy efficiency: have your say and get involved!

Take the lead to tackle climate change and get involved in the European Commission's consultation on the Covenant of Mayors for energy efficiency.
The Covenant of Mayors brings together mayors of Europe's cities.and local governments in a permanent network to make better use of energy in cities and towns. It was officially launched in January 2008, as a response of cities, local and regional governments to global warming: a formal commitment to reduce their CO2 emissions even beyond the EU 20% objectives through the development of a sustainable energy action plan.
The European Commission has now opened a wide consultation with the aim of gathering opinions and comments of cities, local and regional governments on the content of the Covenant. A draft text, prepared in informal consultation with many cities and networks of cities, is already available in all EU languages. Interested parties are invited to contact the European Commission before 30 April 2008.
Based on these recommendations and comments, the European Commission will produce a final version of the Covenant which will have to be adopted by the councils of adhering cities, municipalities and regions, by the end of 2008.
For more information, contact the Council of European Municipalities and Regions.