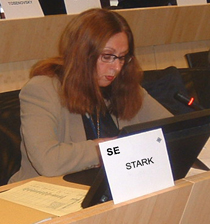 "Representatives of local and regional authorities cannot be considered as lobbyists in the same way as the private or voluntary sector. They act on behalf of democratically elected politicians". This is one of the main conclusions made by Annelie Stark representing the Council of European Municipalities and Regions (CEMR) at the conference on transparency and interest groups, on 26 September 2006 in Brussels.
CEMR welcomes the European Commission's proposals on transparency and interest groups. However it believes that local and regional governments and their associations play a very different role in Europe's governance system. The Transparency Initiative would therefore benefit from further clarity, said Annelie Stark, I refer here to the definitions and basic framework proposed in relation to interest representation.
CEMR holds that there is scope for improvement and looks forward to further discussions on this question to make sure that the important Transparency Initiative is as clear and effective as possible.
Annelie Stark is a member of the regional executive committee of Västra Götaland, in Sweden.
The full speech of Annelie Stark
The European transparency initiative (in 20 languages)
Translate