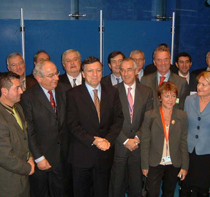 Commission President on the constitution, subsidiarity, SGIs and energy

The president of the European Commission, José Manuel Barroso, has met representatives from associations of local and regional government, on 7 December 2006 in Brussels, at the occasion of the plenary session of the Committee of the Regions. He presented the Commission's 2007 work programme to them.
The Commission is in favour of maintaining the substance of the constitutional treaty, and it supports the ambition of the German presidency, he said. The president of the European Commission added that subsidiarity is not a mere administrative concept, the national governments must implement it. However, José Manuel Barroso added that not having a constitution makes it more difficult to carry out our responsibilities with regard to subsidiarity. On Services of general interest (SGIs), the president of the Commission said that the reality of SGIs is they are complex, you cannot have a uniform response at European level.
Anders Knape spoke on behalf of the Council of European Municipalities and Regions. He stated that CEMR wishes to ensure that in any future institutional settlement, the gains achieved for local and regional government in the Constitution are maintained and strenghtened. He welcomed the emphasis given to the role of local and regional level in stimulating innovation and economic change. We also welcome the Commission's proposals on energy and climate change; however, we are concerned that sustainable towns and cities seem to be no longer on the agenda. We are also concerned that in the recent past, the Commission's services have interpreted the rules of the internal market in ways that have not really followed its objectives. Anders Knape referred to the provision of services of purely local dimension and with no impact on cross-border trade, to inter-local government cooperation, and in-house delivery.
Riccardo Illy spoke on behalf of the Assembly of European Regions. He stressed the importance of energy, adding that not just rules are required but also to improve the infrastructure.
The Conference of Peripheral and Maritime Regions was represented by Ramon Valcarcel Siso. He stressed the importance of the role of regions to modernise European economy, adding that they play a vital role in innovation.
The president of EUROCITIES, Jean-Michel Daclin, recalled the role of cities in demographic changes, in social inclusion, e-inclusion, immigration and integration. He also stated that services of general interest (SGIs) are extremely important for EUROCITIES.
The presentation of the Commission's 2007 work programme by president Barroso
Anders Knape's speech on behalf of CEMR