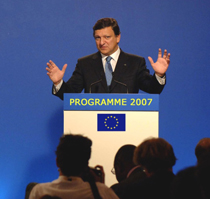 Which actions will EU Commission take in 2007? (new legislative and work programme)

The European Commission has adopted its legislative and work programme for 2007.
For the first time, the Commission identifies a series of 21 strategic initiatives that will be the main focus of its work in 2007. In addition, it sets out a further series of priority actions to be adopted over the next 12 to 18 months.
The Commission says that the 2007 strategic priorities build on the four overall priorities for the Barroso Commission: prosperity, solidarity, security, and a stronger voice in the world, and the 'Citizen's Agenda: Delivering Results for Europe" document adopted on 10 May 2006.
The priorities for concrete action in 2007 are to modernise the European economy and equip Europe with the capacity to respond to the challenge of globalisation. This will include a new phase in the action at EU level on the Lisbon strategy for growth and jobs, a Single Market review and a comprehensive stocktaking of European society.
The work programme also takes the better regulation initiative to a new phase, by identifying simplification initiatives and withdrawals of pending legislation, and includes a list of priorities for communicating with citizens for the first time.
The EU Commission's 2007 legislative and work programme