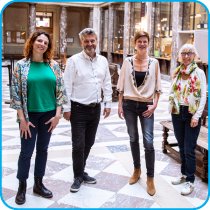 Being inspiration for others is the best recognition of our work

IncluCities continues the series presenting the key people behind the project with a special double interview. Vincent Vanhalewyn, alderman responsible for social cohesion in Schaerbeek, and Janaki Decleire, Director of VIA association, a vital project partner, answer questions on the integration of migrants and the impacts of the Ukrainian refugee crisis on the municipality of Schaerbeek, an IncluCities mentor city.


Schaerbeek is one of the 19 municipalities of the Brussels-Capital Region. A rich cultural diversity characterises its population of over 133,000 inhabitants. Where are the newcomers from?

Schaerbeek is indeed a cosmopolitan municipality. Over one third (37%) of the population is of foreign nationality, not counting people who have just become Belgians.
Those who come to our BAPA VIA reception office – which is tasked with welcoming newcomers – do not only come from the municipality of Schaerbeek since our reception programme is open to anyone living in the Brussels area. Approximately one-fifth comes from Schaerbeek and another 18 per cent from Molenbeek, and the rest from other municipalities. These people are mainly from Syria, Morocco, India, Afghanistan and Guinea.

Schaerbeek is the fourth-most densely populated municipality in Brussels. How does this affect city life?

Schaerbeek's population has continuously grown – despite 2020 being an unusual year, with the lowest growth recorded in the Region since 1998 – and higher growth is expected to resume, albeit to a lesser extent. We have a multicultural population, with over 100 nationalities in 2019.

This situation is both an asset and a challenge regarding public infrastructure, with a significant need for nurseries, schools, housing, etc. To meet these needs, we have launched several urban projects, notably with the support of the Region in the framework of the neighbourhood contracts, to improve public space, develop social infrastructures and housing and, to a lesser extent, develop our economic and social fabric.

Since the 1960s, Schaerbeek has also developed an important and active network of associations, which helps to create links within the neighbourhoods and improve the coexistence of people with diverse backgrounds.

If managing migration is a national competence, it becomes a local responsibility as soon as people arrive in a specific territory. What are you responsible for?

Indeed, the municipality intervenes at different levels in the reception of migrants, from keeping and updating the civil register to the registration of new arrivals in the register of foreigners. The objective is also to ensure citizens' well-being and make sure that everyone finds their place.

With its neighbourhood service and Urban Prevention Programme (PPU), it seeks to create a close relationship with the population to establish a dialogue and improve community life in Schaerbeek. Since 2016, the municipalities of Schaerbeek and Molenbeek have promoted the opening of a Reception Office for Newcomers (BAPA), one of the central actors in integrating newcomers in the Brussels Region, giving Schaerbeek a significant role in the reception of migrants.

We’ve witnessed a united feeling in welcoming Ukrainian refugees across European cities, including in Brussels. How did you manage the first few months of the Ukrainian refugee crisis? What is the trend, and what are the most pressing issues?

In the first couple of months of the crisis, the Municipality provided a webpage with basic information for Ukrainian refugees regarding accommodation, administrative procedures and rights, including the existence of the CPAS (the Brussels welfare agency). A temporary coordinator has been appointed at the municipal level to centralise the information and to answer questions from people, both refugees and Schaerbeek citizens.

Thanks to a regional grant, the support has been formalised since July, with two additional municipal officers offering refugees and anyone else involved in the reception process all the basic information, including psychosocial support for Ukrainian refugees.

While waiting for the Region’s provision of collective housing, the municipality had to rely strongly on volunteers to host the refugees during the first months of the crisis.

VIA reacted very quickly to the arrival of many Ukrainian people and this was done without undermining the reception capacity towards other newcomers. Thanks to the financial support from the French Community Commission, we were quickly able to hire new Russian- and Ukrainian-speaking colleagues to organise 15-hour information sessions adapted to this new audience in their language, thus offering them the same service as any other person coming to our offices.

As part of the IncluCities project, Schaerbeek is participating in a mentoring process with the Latvian city Jelgava. What can you offer them, and what is the most important lesson from this process for you?

In the IncluCities project, we are in a mutual learning process with the city of Jelgava. This allows us to think strategically about the integration of newcomers and evaluate our practices. Thanks to this project, we were able to look into the relevance of creating a digital information tool for newcomers, such as a smartphone application, and to learn from what other local authorities have done in Belgium and beyond. The city of Mechelen has done excellent work, for example, with their Welcome App. The non-profit organisation DUNE has created a special app, Le Bon Plan, listing all of Brussels' diverse social and medical support services. The project's funding did not allow us to go further in developing a mobile application; nevertheless, these experiences inspired us to update the VIA website in the framework of the project.

Jelgava has recently had to bravely deal with a large migratory flow due to the war in Ukraine. The municipality of Schaerbeek has already had to deal with numerous migratory flows in the past. We wanted to share this expertise with our Latvian partners by showing them what we have done, hoping to give inspiration in a medium and long-term perspective on integration.

One of the outcomes of this project is also a One-stop-shop, an improved online platform for newcomers in the municipality – can you present the main elements of this website and its objective?

With the budget allocated by the IncluCities project, we could rework the page on our website BAPA VIA describing the welcome path and make it more accessible to all. The route is explained more playfully and intuitively than before. The content is also translated into ten languages and is available in a spoken version for people with reading difficulties because there are many people who do not read or have very little school education among the newcomer population. We have also created a new page offering an essential directory of services helpful to any newcomer in various fields, such as social assistance and legal services, health, children's services and French language courses. This way, people who do not wish to start a reception process at VIA will have helpful addresses to find answers to their questions

The IncluCities project is coming soon to an end. What has been the main benefit for you?

The most significant benefit is the exchange between the different partners of the project. Participating in a programme that brings together eight different cities that share their own experience of welcoming newcomers is inspiring. Even if their context and reality are different, understanding these various realities and seeing what they have been able to put in place, what worked well and what not, allows us to feed our reflection and enrich our work.

The role of a mentor has also made us even more conscious of the road we have travelled since 2016 when VIA was established.  If we can radiate and inspire other actors in the field of integration of migrants, it is an excellent recognition of our work.

Schaerbeek is described as being "as stubborn as the donkey" (the symbol of Schaerbeek) and "as fertile as the land on which the cherry trees grow". What do these sayings mean?

In the past, the people of Schaerbeek, who grew cherries, had the privilege of taking donkeys to the Brussels market to sell them to the brewers who made beer (Kriek!). When they arrived, the people of Brussels would exclaim: Hei! doë zên die êzels van Schoerebeik (in dialect: Here come the donkeys of Schaerbeek!).

Even today, Schaerbeek is called the "City of Donkeys", and its inhabitants are proud of it!  New projects regularly flourish in Schaerbeek, like the cherry trees. It is a breeding ground to bring the municipality to life and enhance its value on various levels: community life, solidarity and its rich heritage.

I agree and can add that our work illustrates this notion of fertility. We are constantly setting up new projects to respond to the needs expressed by our beneficiaries, whether it is the creation of our immersion house or the setting up of the volunteering project or the PEPA programme (an entrepreneurial pathway for newcomers). In this way, we draw on the exchanges that we can make, but also, in a co-creative approach, on the needs expressed by the newcomers with whom we work. They are truly the ones who are the basis of all our new projects and we try to be as close as possible to their needs.

As for the word "stubborn", it perfectly illustrates our desire to keep moving forward and to take up the challenges that come on the way!