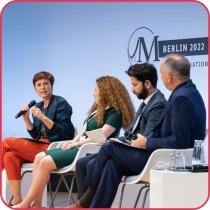 From Berlin to Beirut, "migration is not a problem to be solved but a reality to be managed"

Multiple global crises impacting migration and mobility require immediate and coordinated local responses. What are the main challenges and which solutions have already proven sustainable? CEMR and IncluCities explored these questions at the International Metropolis Conference in Berlin.

Berlin is known as multicultural city where every second child has a migration background. Migrants play an important role in the city and migration affects all levels of political and daily life. Indeed, Berlin was the German state to implement a specific Act on migrant integration, notably boosting their opportunities to work in the public sector.

Local authorities work hand in hand with NGOs and civil society to have a sound understanding of the situation on the ground. In crisis management, the local level is strategic, explained Katarina Niewiedzial, Commissioner of the Berlin Senate for Integration and Migration. "However, we are very slow and still do many things on paper", she said. "There is still a lot we can learn on digital solutions on migration from other cities, like Warsaw".

Conversely, the city of Warsaw has also learned from Berlin’s best practices and experience to build a more efficient and comprehensive response for migration flows. When 800,000 Ukrainian refugees arrived in Warsaw following the Russian invasion, less than 12 hours was needed for the city to set up a working plan for crisis management.

Despite having minimal or no resources and depending on support from various organisations, civil society and NGOs, they focused on integration and the labour market from the very beginning. "Over half of the adult refugees, mainly women, managed to find a job in the city within four months", said Tomasz Pactwa, Director of Warsaw's Projects and Social Affairs Department.

Public attitudes were another vital element they tackled to prevent negative propaganda around refugees. After conducting a survey, city authorities identified and addressed citizens' fears, such as overcrowding and crime, through communication campaigns. This paid off as the narrative changed and solidarity prevailed.

Not all cities have positive stories to tell. Lebanon is the country with the highest number of refugees per capita. They have been facing one of the worst economic and financial crises in decades if not more, with most residents falling under the poverty line and an inflation rate of over 150%.
Refugees in the country are not seen as a problem to be solved but rather a tool for political elites to gain influence through populist rhetoric and spreading misconceptions. "An alarming increase in discrimination, harassment, and violence against refugees is present", explained Fatima A. Ibrahim, Executive Director of the Refugees=Partners project (Lebanon & Syria).

Gaziantep, a big Turkish city near the Syrian border, hosts half a million refugees: onefifth of the city's population are newcomers. Since 2015, the local authorities have adapted their services to the situation by establishing local principles on refugee response that leave no one behind and include conflict-sensitive planning.

The city has opened a migration management department, a social research centre, health care units, community centres, art and vocational centres, a women's solidarity and empowerment shelter and a rehabilitation centre, as well as distributing humanitarian aid. "In Gaziantep we believe migration is not a problem to be solved, but a reality to be managed," said Önder Yalçın, Director of the migration department for the city of Gaziantep.

Learning from each other

Inclusion happens at the local level and presents a huge challenge for local communities that lack capacity, knowledge and financial resources. "This is why we have started with the EU IncluCities project, to enable a vivid exchange of best practices among mentor and mentee cities to improve local inclusion", said Maria Grazia Montella, CEMR migration officer.

The responses from stakeholders on the ground, cities, their support networks, and local and regional government associations are strikingly positive. In two years and a half, cities participating in the IncluCities project have already begun impressive processes of change.
The Belgian #BuddieswithRefugees project is being replicated in the Sicilian town Capaci. A migrant consulting body has been established in the Greek city of Levadia to co-create policies with the newcomers.

Meanwhile in France, the town of Saint-Jean-de-la-Ruelle has created a women's house to integrate refugees with a view to their particular needs. And with Russia's war in Ukraine, Jelgava in Latvia went from having just a handful to over a thousand refugees. The municipality managed to set up from scratch an operational information and reception centre for newcomers.

Everywhere, we can see things happening and that’s the main goal of our project. Every city has different dynamics and structures, yet the fundamentals of addressing migration through a lens of inclusion and respect for human rights form the core of successful management at the local level. Through IncluCities and similar projects, the principles and practices that work in one locale can be replicated and adapted in other places.