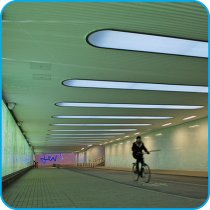 As women are still underrepresented in the world of urban planning, we are often confronted with cities that are planned by men and so informed by their experience of the public space. Spotlighting gender equality when developing and planning our municipalities can enable to create safer and more inclusive urbans spaces for all.

One success story comes from the Swedish city of Umeå (population 130,224) which has been working to integrate gender equality in urban planning since the late 70s. Signatory of the CEMR European Charter for Equality since 2008, the city was selected as the lead partner in the EU-funded 2019 programme Gendered Landscape network organised by URBACT.

In 2009, Umeå launched an innovative and ongoing initiative: “The Gendered Landscape” bus tour throughout 25 stops representing municipal initiatives that integrate gender considerations and urban planning. It raises awareness on the importance of a gendered and long-term perspective on urban planning, showcases successful work on gender equality and draws attention to issues that still need to be addressed. In constant adaptation, in this article you can find some of the highlights of Umeå’s innovative action.

The municipal parking company Upab has worked to transform the Nanna parking garage into a safe and accessible-to-everyone environment: it was repainted, new and better lighting and more easily opened doors were introduced, and the brick walls in the stairwells were replaced with glass walls for better visibility.

Umeå Municipality has built the Free Zone in Årstidernas park in close collaboration with a group of young girls who have shared their experiences of the public space and their sense of safety or unsafety. This led the municipality to work on visibility, lighting and proximity to the road with other people, in the attempt to make the Free Zone a safe and convivial meeting place for socialising, with seating areas, electrical outlets, Wi-Fi and the possibility to listen to music on speakers.

A dark and narrow station tunnel was transformed into a safe and accessible place, with large light intake and rounded corners for better visibility. Moreover, the tunnel is animated by a work of art that offers a cosy and sheltered feeling: the artistic creation is a tribute to local author Sara Lidman, whose quotes, reads and talks – along with a loop of environmental sounds – can be activated by pressing buttons.

These are only some of the many examples that Umeå can showcase. As the city has experienced, the benefits of having a gendered landscape are multiple: and designing for women contributes to the creation of a sense of belonging, welcome and safety for people of different generations and different backgrounds.

Having inspired her own work from other cities’ realities, Umeå gender equality officer Linda Gustafsson argues that is crucial for cities to compare and exchange on each other’s work. In this way, each city can find its own solutions, suited to the local context, on how to approach gender equality and integrate it into urban planning.