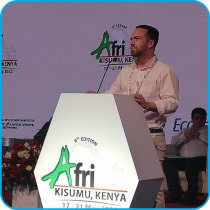 Youngest Mayor of Portugal: “Young people should be seen as change leaders”

It is essential to better involve young people in politics and decision-making. That was the message of João Fortes, the mayor of Mourão and the youngest mayor of Portugal, during the Africities Summit organised by UCLG Africa in Kisumu (Kenya).

The Summit, which took place from 16 to 20 May, gathered local governments and communities, civil society organisations, and development actors from across Africa, as well as many international players. The participants discussed the high stakes involved in the implementation of the UN’s 2030 Agenda. A day dedicated to youth issues highlighted the crucial role that the next generations play in the development of their territories.

The young elected mayor presented some of the policies being implemented at European and local level to move towards a more inclusive and sustainable social model. According to him, young people must be considered “change leaders” in this process.

Whereas 2022 is the European Year of Youth, a Eurobarometer survey has found that a large segment of young Europeans consider that they are not sufficiently listened to by public authorities.

Young people face increased risk of poverty, notably in the post-pandemic context, and there are reasons to fear of a disengagement of young citizens from political life. To answer this, João Fortes stressed the need “to provide the conditions for young people to be genuinely involved in decision-making.”

The mayor of Mourão also highlighted several projects being undertaken in his municipality and in Portugal. Indeed, Portuguese youth are also being affected by the consequences of the health crisis and a difficult economic situation.

Mourão is taking numerous initiatives in these areas with the creation of a Local Assembly of Young People, a participatory budget, technical support for youth organisations, strengthened children’s access to medical and dental care, and the development of youth exchanges and volunteering opportunities.

The Summit was also an opportunity to bring together PLATFORMA and CEMR’s Committee of Young European Elected Representatives and YELO members. These two networks of African and European local leaders could soon undertake actions in cooperation to put in perspective the issues encountered in the development of their territories.

Relive the Summit on Twitter with the hashtag #Africities9.