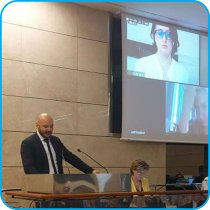 Young local leaders: time "to go beyond the simple notion of 'youth'"

Empowerment and representation: these are the keywords defining the work of the Committee of Young European Elected Officials run by CEMR and PLATFORMA. Cemal Baş, Councillor of the Municipality of Keçiören (Turkey), spoke on behalf of this network, which is currently being rebuilt, at CEMR's Policy Committee in Bologna (4-5 July 2022).

The network's aspirations go "beyond the simple notion of 'youth', since it is above all about supporting young leaders in their becoming familiar with the major European issues and opportunities for the local and sustainable development of territories, while enabling them to bring the voice of CEMR, PLATFORMA and their own local authority to international discussion forums."

Gathered in Italy for two days, CEMR's members were able to take stock of the association's main orientations and thematic projects. It was an opportunity to highlight for the first time the development of the Young Elected Officials Committee. Cemal Baş stressed that this "network is growing and is today giving the possibility to strengthen the voice of European local and regional governments."

After a break of several months, this group of young European leaders has been reviving since spring 2022, in a context marked by the European Year of Youth. So much so that today, it brings together more than fifteen elected representatives under the age of 40, from the four corners of Europe: Austria, Georgia, Germany, Greece, Italy, Latvia, Malta, the Netherlands, Portugal, Romania and Turkey.

Beyond their nationality, the diversity of the members of this network is embodied in the their different areas of expertise. As was pointed out to the members of the CEMR Policy Committee, "each young leader has his or her own field experience and expertise in relation to the public policies implemented in his or her area." This is a real strength for pursuing the objectives of the Committee of Young Elected Representatives and promoting the interests of Europe's local and regional governments at European and global level.

In concrete terms, recent weeks have seen João Fortes, Mayor of the Portuguese municipality of Mourão, bring the voice of European local and regional governments on youth and sustainable development to the Africities Summit organised by UCLG Africa in Kenya. Hannah-Lea Braun, elected member of Maichingen Local Council in Germany, will also participate in the UN High Level Political Forum on the Sustainable Development Goals (HLPF) in New York.

All the perspectives raised during this presentation will be at the heart of the first meeting of the Committee of Young European Elected Representatives in autumn 2022, while a spokesperson will be appointed to CEMR's Policy Committee by the end of the year. In the meantime, the next few weeks will allow to enlarge this network of young European local leaders, as CEMR members are invited to nominate two local elected representatives.