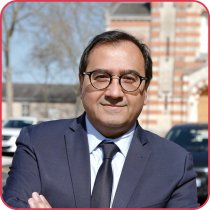 French mayors and the Ukrainian crisis: A conversation with Christophe Chaillou

As part of a series of interviews of the local leaders engaged in the IncluCities project, we spoke with Christophe Chaillou, the Mayor of Saint-Jean-de-la-Ruelle in France, on the Ukrainian crisis, the integration of migrants and the role of local governments. Mayor since 1998 and a councillor for the Loiret département since 2001, Christophe Chaillou is also the Director General of CEMR’s French Association (AFCCRE).

With over 4 million Ukrainian refugees in Europe, we are witnessing the biggest migratory movement since the Second World War. What does this mean for local and regional governments?

Municipalities and regions are playing a leading role in managing, day by day, the impact of major crises. Responding to our citizens’ emotion and solidarity initiatives, local and regional governments immediately took action to support and take part in the welcoming of refugees, each according to their competencies. Municipalities have then been in the front line in determining the accommodation possibilities in their territories.

National associations of local and regional governments like the AFCCRE are also taking action. What role can they play to support the Ukrainians?

The national associations rightly support these actions, notably in the countries most affected by the massive arrival of displaced people. I was able to see this recently, in Romania, where the mayors and other elected officials are mobilised to manage and anticipate this evolving situation.

The AFCCRE is working with local government associations in the most affected countries in order to communicate their local governments’ needs with their French peers, as was the case recently during an online meeting with our Polish colleagues, on 31 March. The AFCCRE, in solidarity with Ukrainian citizens and local elected officials, also shared with its members CEMR’s Declaration on Ukraine.

Your municipality, Saint-Jean-de-la-Ruelle, stands in solidarity with Ukraine. You have decided to take a series of actions in partnership with your twin-town Niepolomice, in Poland, which itself is twinned with Kobeliaky, in Ukraine. What actions are you planning?

Our twin town is facing a massive arrival of refugees: over 2000 over ten days. It then had to mobilise all its energies to facilitate the hosting of this population, with the decisive support of citizens and the big associations. We immediately proposed to help them and this will take concrete form in the coming days.

For example, in the area of education, we are going to support the financing of language classes. Our Municipal Council unanimously voted to provide €30,000 in financial support to Ukrainian citizens and, notably, €10,000 for our Polish twin town. This will fund language classes in the Niepolomice municipal library for the Ukrainian families being hosted.

We are witnessing an unprecedented moment of European unity on the welcoming of Ukrainian refugees. The European Commission’s proposal to active the directive on the temporary protection of people fleeing Ukraine would give these refugees right of residence and access to the labour market and schools. However, concerns have also been raised about discrimination against other refugee populations. What is your position on this subject?

For my part, I am very attached to the tradition of welcoming and protecting people, particularly those asking for asylum, which for me is an elementary human right in our societies and is part of Europe’s fundamental values. I had, in this spirit, welcomed in our municipality a family of Syrian refugees and had expressed my readiness to do the same for an Afghan family last summer.

The integration of Ukraine refugees is a major challenge. How can cities and other local governments prepare themselves?

We are particularly aware of this challenge. We know that the people who are arriving are mostly women and children, and we will be sure to take the particular needs of these refugees into account. That’s why are providing psychological support tailored to their family situations and will ensure the children’s schooling.

With the French presidential elections fast approaching, what role is immigration playing in the political debates?

This question polarised the debates from the beginning of the campaign by providing, with the support of the media and social networks, a first-class a highly prominent platform for all the populists. The war in Ukraine has disrupted this cycle of hatred and rejection.

Turning back to Saint-Jean-de-la-Ruelle, the Orléans Metropole and the département of Loiret. Where are the migrant-origin populations from?

We have in our territories communities stemming from the major waves of immigration, notably those related to economic development and the need for workers: southern Europe, the Maghreb, sub-Saharan Africa, Turkey, and, most recently, eastern Europe.

Your municipal partner within the IncluCities project is the City of Brussels. You are also keeping close ties with six other cities and local government associations via the IncluCities network. What does this direct collaboration between cities entail and what are your expectations regarding this project?

Our town has always favoured cooperation, exchanges, openness and working together through networks. The exchange of good practices, notably at the European level, is a deeply enriching approach for us. IncluCities is an opportunity to take advantage of the experience of the City of Brussels and of other participating European cities in order to develop our know-how and build upon our own experience in the area of welcoming migrants. With the arrival of thousands of Ukrainian refugees in our territories, we will more than ever need to progress in this area and indeed go beyond the response to an urgent humanitarian situation.