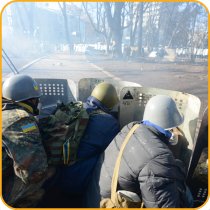 In a declaration adopted on 14 February 2022, the Council of European Municipalities and Regions condemns unprovoked Russian military build-up on the Ukrainian border towns and regions and continued threats against Ukraine in recent months.

We express our deep concern over the current developments around Ukraine, which pose new threats to Ukraine and regional peace, security, and democracy.

Indeed, faced with the tense security situation, Ukrainian local governments are affected and obstructed from creating democratic development of their cities and regions, from proper functioning of local public services, and from taking care of their citizens. Furthermore, due to the tense security situation, implementation of decentralisation and public administration reforms could be restricted, which is categorically unacceptable.

We express our solidarity with the people of Ukraine, local and regional governments, especially in the East of the country, who have suffered greatly since 2014 as a result of the war, and are now living under daily threats of the military offensive against Ukraine while simultaneously continuing to innovate and reform the country.

We reaffirm our full and unwavering support for the independence, sovereignty, and territorial integrity of Ukraine and all Eastern neighbourhood countries within their internationally recognized borders. These principles are enshrined in international agreements of which Russia is a signatory, form the basis of European security, and cannot be revised.

We welcome the European Commission’s recent emergency macro-financial assistance package to Ukraine. We urge the EU institutions and national governments to be united, speak with one voice, and strengthen assistance to the Ukrainian local governments. They are in direct contact with the citizens and continue to provide all public services under the threat of conflict and energy blackmail.

CEMR, with Europe’s municipalities and regions, will continue to support Ukrainian local and regional governments and their associations. We will continue supporting the development of Ukraine through its contribution to decentralised cooperation, the growth of city-to-city and region-to-region ties.

To know more about how local government works and operates in Ukraine, discover its country profile in our TERRI Report.

Bridges of Trust, an initiative to increasing cooperation and exchange of best practices, knowledge and skills between municipalities in Ukraine and the EU.