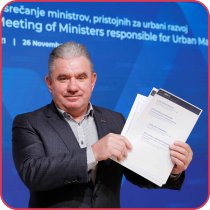 Green light for a renewed Urban Agenda for the EU

This is a major achievement of the Slovenian Presidency: EU Ministers responsible for Urban Development adopted the Ljubljana Agreement on 26 November 2021. By doing so, EU Member States and the European Commission commit to the continuation of the Urban Agenda for the EU and set new modalities for its implementation. CEMR has been closely associated with the preparation of this agreement.
The ministerial meeting was attended by the European Commissioner for cohesion and reforms, Elisa Ferreira. She reiterated her support for the Urban Agenda and insisted on the need for changing paradigm towards a sustainable lifestyle, which is the objective of the Green Deal, and to which EU funds contribute. She also pointed the urban-rural linkages and inter-dependencies between urban centres and their surrounding rural peripheries “They need each other to develop in a sustainable way”.
Together with Krzysztof Hetman, the Vice-Chair of the European Parliament REGI Committee, representatives of Eurocities and of the Committee of the Regions, CEMR spokesperson for territorial cohesion and regional councillor of Tuscany, Ilaria Bugetti seized this opportunity to recall the importance of synergies between EU funds, especially at urban and territorial level: “Synergy between Cohesion funds and Recovery Plans is needed. Never before the principle of proximity and territoriality has been so important in the interest of our citizens”. She emphasised the need for good cooperation between all levels in the programming of EU funds.
What does this agreement mean for local governement?
The Urban Agenda for the EU was launched in 2016 with the Pact of Amsterdam. It was the start of a completely new way of working on urban issues whereby cities of all sizes, ministries and European Commission’s directorate general gather together in thematic partnerships to discuss concrete issues such as public procurement, climate adaptation, digital transition or migrants integration.
Today with the Ljubljana Agreement, the Member States, the European Commission and local and regional governments representatives agree on a new work programme for the Urban Agenda. In this document some key aspects for CEMR are included:
The role of smaller and medium sized cities is clearly stated with the willingness to involve them in the thematic partnerships, and to better communicate on the achievements of the urban agenda. It is also worth noting that the role of national associations of municipalities and regions in supporting municipalities, but also to participate in the thematic partnerships is recognised.
In 2022 the municipalities and regions will have to answer a call for interest to join future partnerships. The Commission will bring some dedicated support such as expertise or communication means. Member States in particular agree to bring additional financial or capacity to support the participation of smaller and medium sized municipalities in the partnerships.
Finally, the Ljubljana Agreement also includes the proposals of CEMR and Eurocities for four new themes: Cities of equalities; urban food; greening cities; sustainable tourism.
What’s next?

The French Presidency starting on 1st January 2022 agreed to launch two new partnerships on greening cities and sustainable tourism. First, an ex-ante assessment will be carried to better define the scope, relevance of the timeline and identify key stakeholders and EU policies relevant for these two themes. Then (mid or end 2022) a call for interest should be launched to select the cities who will join thematic partnerships. For the next themes (cities of equality and urban food), the process should be launched in 2023.
Additional links