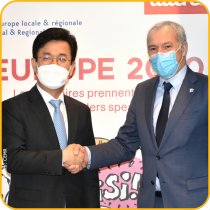 It will be one of the largest event between local governments and international organisations not to be missed. The next World Congress of United Cities and Local Governments (UCLG) will take place in the Korean city of Daejeon, in October 2022.

One year before the event, Heo Tae-Jeon, the mayor of this city located 150 km south of Seoul, paid a visit CEMR secretary general Frédéric Vallier. An opportunity to shed some light on the event’s programme and what the city has to offer.

“The concept of sustainable smart cities will be one of the guiding lights of the 2022 Summit,” explained Heo Tae-Jeon. “But our exchanges will also focus on decentralisation, citizens’ participation and peacebuilding,” he further explained before adding: “The summit will represent a powerful moment peace and a window for dialogue on the Korean peninsula.”

Reacting to this, CEMR secretary general, Frédéric Vallier, recalled the overriding ambition of the organisation, in his words "to  strengthen cooperation between all mayors and local elected representatives beyond national borders”. Mr Vallier also reiterated the importance of this major event and ensured the full participation of European members.

UCLG World Congress is held every three years and is the largest event bringing together 1,000 city leaders from about 140 countries. More information about the programme will be available in the coming months.