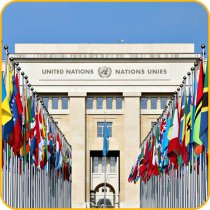 Local government takes a seat at the UN table

75 years already! That’s how long it’s been since the creation of the United Nations, an organisation conceived following the tragedies of the Second World War to ensure world peace and cooperation. To mark this anniversary, a global consultation was held to know what visions citizens have for the year 2045, the UN’s centennial. This enables us to take some perspective in these uncertain times.

Local and regional governments were fully involved in the exercise. The Global Task Force of Local and Regional Governments (GTF), a body in which UCLG, CEMR and PLATFORMA participate, drafted a common local vision for the future. Several elements were taken up by the UN’s own report for the 75th anniversary, notably on the need to better include and consult local government in UN activities.

In this context, the GTF and UN held a joint event to exchange on these visions for 2045, with the attendance of Undersecretary for UN 75 Fabrizio Hochschild and Executive Director of UN-Habitat Maimunah Mohd Sharif.

Towards an official recognition of local government by the UN

On this occasion, Carola Gunnarsson, Chair of Sala Municipal Council (Sweden), CEMR spokesperson on international affairs and Vice-President of UCLG, highlighted the essential role of municipalities and regions in implementing the global agendas, such as the Paris Climate Agreement and the Sustainable Development Goals (SDGs).

“We could consider the creation of a UN body dedicated to local and regional governments with local and regional governments as members, on the model of the Congress of the Council of Europe or the European Union’s Committee of the Regions”, Gunnarsson said. The objective: that there be a genuine cocreation of policies at the global level. If the World Assembly of Local and Regional Governments has been in place for several years, this body is not always officially integrated in UN activities.

Wim Dries, Mayor of Genk, President of the Association of Flemish Cities and Municipalities (VVSG) and representative of PLATFORMA, highlighted the importance of national associations in promoting international solidarity. “Local governments play their role through city-to-city cooperation”, he said. “National associations and international networks of local governments have a key role in supporting cities in this process.”

Dries also recalled the importance of ensuring policy coherence across countries and levels of government in the post-COVID recovery plans. Longer term, the SDGs provide a common framework for local governments’ policies as well as for their international cooperation and advocacy activities.

Representing the United Nations, Fabrizio Hochschild highlighted the fact that local governments enjoy the trust of citizens and thus are well-placed to foster civic solidarity. “We live in a time of fabricated polarisation, however, citizens demand more cohesion and partnerships”, he said. “Local government are key to working on this. The UN recognises their role and will work further with cities and regions for 2045.”

These messages, shared by local and regional governments worldwide, will strongly resonate in this period of recovery in the wake of COVID-19.

Local and regional governments and the UN: a flourishing partnership

In addition to this session, CEMR and PLATFORMA have participated in several other key events with the United Nations since the beginning of 2020.

- The World Urban Forum, organised by UN-Habitat in February 2020 at Abhu Dhabi, enabled a delegation of European local and regional officials express their messages before heads of the state from the world over.

- The High-Level Political Forum, organised by the United Nations Department of Economic and Social Affairs (UNDESA) in July, for the first time had an entire theme dedicated to the role of local and regional governments. PLATFORMA and CEMR notably participated in an exclusive consultation on the Forum’s programme.

- The Forum of Mayors and SDG 11 Day (sustainable cities and communities), organised by the UN Economic Commission for Europe (UNECE) on 5 to 6 October, for the first time centralised messages from local government representatives. On this basis, UNECE will adopt tailor-made and targeted instructions for Member States. Wim Dries, Mayor of Genk, represented CEMR and PLATFORMA on this occasion.