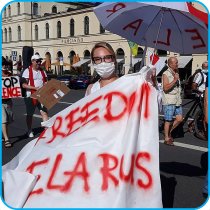 Add your voice and stand for democracy and human rights in Belarus!

CEMR invites its associations, local and regional leaders and citizens to stand with the European Movement International (EMI) calling on the Belarussian authorities to immediately release Raman, Sofia and all political prisoners!

In a statement adopted by its assembly last week, the EMI indicates that “the outrageous hijacking of an airplane by the Belarussian authorities and the detention of Raman Protasevich and Sofia Sapega are unprecedented and unacceptable challenges to international laws and norms which must be countered. We call on Belarussian authorities to release Roman, Sofia and all political prisoners immediately”.

The statement goes on to say that “the conclusions adopted by the European Council are a first step in the right direction”. It urges the EU and all European states to go further in that direction and “to sanction the leaders of Belarus by all means possible including by the confiscation of all their personal assets, closing borders of the EU to members of the political and economic nomenklatura and stopping all commercial relations with Belarus”.

The EMI’s goal is now to collect at least 2,000 signatures and invites all European civil society organisations and citizens to stand with them in this call. To read more, click here.