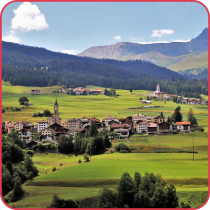 Did you know that rural areas represent around 80% of the total EU area while 72 % of the population lives in cities and urban areas? And that almost one third of citizens live there? Despite of their prominence, rural areas in Europe face many challenges such as depopulation or falling on the wrong side of the digital divide. Only 59% of EU rural households have high-speed internet access and the average road distance to the nearest doctor in rural areas is almost 21.5 km, while in cities it is only 3.5km.

The European Commission is currently working on its long-term vision for rural areas, to be published on 23 June, which aims to tackle these challenges and revitalise the countryside. CEMR organised an online event on 4 May to discuss local governments’ key challenges in rural areas, as well as their role in and recommendations for the EU’s vision.

“There is a growing perception that the importance of rural areas is unappreciated. (According to the Commission’s public consultation), 56% of inhabitants of rural areas felt left behind. With this initiative, we are starting a process which will continue until 2040 and beyond”, declared Mario Milouchev, Director for Rural development from the European Commission’s DG AGRI.

Improved infrastructure, especially public transport, access to basic services and amenities (water, electricity, banks, post offices) are crucial. According to the OECD’s Head of Regional and Rural Policy Unit, Enrique Garcilazo, there needs to be an emphasis on innovation, support to SMEs’ and entrepreneurs’ growth, anticipation of demographic patterns and  digitalisation to provide services. He also advises seizing of climate and environment opportunities (circular economy, sustainable use of land, transportation, etc.) in rural and remote areas.

What is at stake for local governments?

When talking about rural areas “democracy is also at stake: insufficient investments and territories left behind lead to a more divided society,” declared Cllr Steven Heddle, Member of Orkney Islands Council (COSLA) and CEMR spokesperson on territorial development. “A great number of the areas that struggle with access to public services or employment are rural. This is why the topic of rural areas should be a full part of the Conference on the Future of Europe and not only part of the cohesion or agriculture policies debates,” he added.

The EU is part of the answer but it cannot address the problem alone. It has to involve local and regional governments as drivers for long-term territorial development.

One key aspect is access to funds. Rural municipalities do not always have the means to mobilise EU funds. “The issue of resources is key: either we have to enhance it or make EU funds simpler, especially in rural areas. We cannot have the same requirements for a railway development project as for a 10,000-euro fund for a local library”, declared Thibault Guignard, mayor of Plœuc-l’Hermitage (AFCCRE) and President of LEADER France. Beyond that, “we need to add a rural dimension to EU policies,” he added.

The coronavirus pandemic has also raised the potential of rural areas to tackle climate change. Due to COVID, people are coming back to the countryside: “With jobs, affordable housing, good internet networks, health care and schools […] there will be no need to commute long distances, which will also help reduce emissions”, argued Dr. Walter Leiss, Secretary General of the Austrian Association of Municipalities.

What can the EU do?

A recent CEMR survey* shows the obstacles that local and regional governments encounter when accessing EU funds in rural areas. Respondents highlighted the difficulty to combine EU with national and regional funding, although a combined use of funds in a particular territory would ensure a coherent use of resources.

Respondents also pointed out the disconnect between funds and the reality on the ground: while EU funds are considered to be effective at tackling issues such as pollution, poverty and unemployment, in many cases they do not tackle urgent rural challenges, such as depopulation, the digital divide or lack of public transportation.

To counter these problems, dedicated EU cohesion and agricultural programmes should support rural areas, but the post-COVID recovery (NextGenEU) should also target the countryside. “At the European Parliament, we emphasise the importance of cohesion policy to reduce the disparities between rural and urban areas”, said MEP Erik Bergkvist, member of the REGI Committee and of the RUMRA and Smart Villages intergroup. “The EU’s recovery and resilience facility will also play a crucial role. […] We need internet, and broadband to install 5G to eventually have for example drones to transport supplies in rural areas.”

The long-term vision for rural areas will be linked to the Territorial Agenda 2030 – A future for all places, that was adopted by Member States at the end of 2020. Ms Sina Redlich from the German Federal institute for Research on Building, Urban Affairs and Spatial Development (BBSR) presented in particular the pilot action “A future for lagging regions” that will support the implementation of spatially relevant measures and shaping local development perspectives for lagging regions, including to secure services of general interest on local level, for example in the areas of supply and digitalization.

We are at the starting point of the reflection on how rural Europe should look like in 2040. To CEMR, one thing is sure: if the EU wants to successfully revitalise rural and remote areas, it has to fully acknowledge local and regional governments as drivers for the EU’s long-term vision and target them and facilitate their access to EU funds.


*9 EU Member States with the goal of gathering data on the use of EU funds in rural areas.

CEMR key messages, Long-term vision for rural areas: Making “no one left behind” a reality
Uptake of EU funds in rural areas: Analysis from a local and regional perspective
Rural well-being: Geography of Opportunities – OECD Principle on Rural Policy