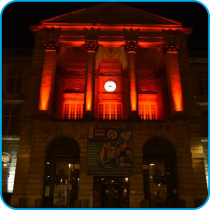 Municipalities from the Basque Country, Estonia, Norway and Poland have joined the pan-European movement already supported in France, Germany and Italy. This follows the call of the Council of European Municipalities and Regions (CEMR), together with PLATFORMA, to join the campaign #DemocracyUnderPressure initiated by the Young European Federalists (JEF).

25 March marks the unofficial day of freedom in Belarus, celebrated annually by the democratic opposition. More than ever, this date is an opportunity to celebrate those who fight every day for democracy and refuse to recognise the August 2020 election results.

In Gdansk (Poland), Mayor Aleksandra Dulkiewicz and deputy Mayor Monika Chabior held a press briefing on 24 March on the square named after the Belorussian poet and writer Yanka Kupala, where two rows of white-red-white daisies symbolize the flag of free Belarus.

From 22 March to 26 March, the city of Rouen (France) is lighting up its city hall in white-red-white in solidarity with the Belarusian people.

Other cities across Europe, such as Münster (Germany) or Novara (Italy), are lighting public buildings in white-red-white on 25 March. Bologna, Riga, Stockholm, Strasbourg, Tallinn, Vilnius and other cities and towns already did so for the Day of Solidarity with Belarus on 7 February.

Since the contested presidential elections of 9 August 2020, Belarusians have demonstrated to dispute the re-election of Alyaksander Lukashenka, in power since 1994. These protests have been violently suppressed by the authoritarian government, forcing those political opponents who had not already been imprisoned to flee the country.

The European Union has refused to recognise the August election result and has placed sanctions against the Lukashenka regime while the European Parliament awarded the 2020 Sakharov Prize to the Belarusian democratic opposition for their bravery and commitment to freedom of expression.