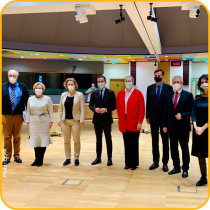 EU dedicates €500 million for towns and regions under NDICI

The EU’s new financing instrument for international development includes mandatory consultations of towns, regions and their associations in the elaboration of EU development programmes. It also dedicates a minimum of €500 million for towns and regions in partner countries.

With the “Neighbourhood Development International Cooperation Instrument” (NDICI), the EU’s development policy will be entering a new phase in 2021: this unique financial mechanism will cover the funding of all activities implemented under the EU’s neighbourhood, development and international cooperation policies.

Mid-December, the European Parliament negotiators – rapporteurs Charles Goerens, Michael Gahler, Maria Arena and Rasa Jukneviciene, led by DEVE Committee Chair Tomas Tobé, and AFET Committee Chair David McAlister – met with the representative of the German Presidency of the Council of the EU and the Commissioner for International Partnerships Jutta Urpilainen for a last trilogue tackling the remaining politically sensitive issues.

The NDICI (which might be called the “European Global Instrument” in the future) recognises the key role of towns and regions in policy consultation, which will now be mandatory in partner countries. Additionally, the EU committed to support the empowerment of LRGs in partner countries with a minimum of €500 million. This figure will be enclosed in a recital under the geographic programmes of the EU regulation.

Although this amount is lower than the level of EU support for 2014-2020, if thematic and geographic programmes are combined, this political commitment shows that the “local authorities have always been an important part for [the European Parliament],” during the negotiations, as MEP Michael Gahler mentioned on 14 January 2021 during a committee meeting .

The structured dialogue that has been initiated with LRGs in partner countries will be bolstered through updated procedures in order to strengthen towns and regions’ capacities. What’s more, their national representative associations will engage in dialogue with EU Delegations to better express the needs and positions of local and regional governments.

The European Parliament will also have a say in the ongoing programming process through the new procedure of delegated acts. The programming phase is indeed an important one as the EU Delegations will, on the ground, decide on the priorities to be implemented concretely during the forthcoming financial period (2021-2027). The new provisions in place as of this year will give the EU Delegations greater leeway to determine how best to allocate funds at country level. This “geographisation” of EU programming is a positive development, as it fosters a greater sense of ownership and hence appropriation by partner countries .

Support to towns and regions

“Now is a good time to clarify the conditions in which support to local and regional governments is provided”, added Marlène Siméon. For each country and sector, the EU will decide on the way its support is delivered: budget support, calls for project proposals and/or exchange of expertise . It will also determine through which channels to provide support: indirectly through implementing partners such as big national and multilateral agencies, or directly to final beneficiaries through calls for proposals/projects.

But two questions remain open: How will the use of these €500 million for towns and regions be monitored? How will support to decentralised cooperation be ensured?.

“This new cycle for the EU development policy has provided us with an occasion to rethink, restructure and fine-tune the ways in which LRGs and their associations engage with EU institutions, and work hand in hand at country level with different levels of governance. Let’s seize this opportunity to confirm this political commitment by creating specific programmes for peer-to-peer learning and projects,” Ms Siméon concluded.