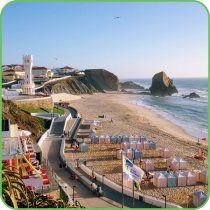 And they’re off! Four cities have just signed up for the European Green City Accord, thus becoming the pioneers of this new movement of mayors committed to the protection of the environment in their territories.

Torres Vedras in Portugal and Lahti and Turku in Finland are already leading figures of sustainable urban development in Europe through their involvement in several initiatives and projects such as the Covenant of Mayors for Energy and Climate and the Green Leaf Award. Alongside them, the municipality of Penafiel has also affirmed its ambition to become a greener and healthier city.

The populations of these four cities vary between 72,000 and 193,000. One more sign that, whatever its size, each territory can be at the forefront in this field!

The cities officially became signatories by adopting a commitment document within their city councils. They now have two years to define the objectives to be achieved by 2030 in five areas: water management and quality, air quality, noise pollution, biodiversity and green spaces, and waste and the transition to a circular economy. They will then have to monitor progress every three years.

Following the announcement of the European Commission’s ambition of having 100 climate-neutral European cities and ahead of the adoption the Zero Pollution Action Plan in 2021, the signatories of the Green City Accord are at the heart of a transition that puts the health and quality of life of European citizens first.

CEMR, which participates in the dissemination of the Agreement, strongly encourages municipalities across the European Union to join this community at the forefront of environmental issues. We also invite our member associations to become Supporters of the Accord in order to facilitate its promotion. For more information, please contact Axelle Griffon.