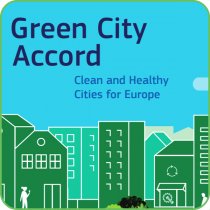 Launch of the Green City Accord: making our urban spaces healthier and cleaner

CEMR and its partners are pleased to announce the launch of the Green City Accord, a new European initiative to encourage cities to become healthier, cleaner and more environmentally friendly. Individual cities will volunteer to commit to achieving environmental improvements in five areas: air quality, water, waste, noise pollution and biodiversity.

“More than 70% of the European Union’s population lives in cities”, said Audrey Linkenheld, Deputy Mayor of Lille and Vice President of the Lille Metropolitan Area. “Therefore, addressing environmental challenges that pose risks to the health and wellbeing of our citizens starts at the local level. Cities must be the areas in which solutions really take off.”

The new initiative was presented during an online session of the European Week of Regions and Cities (EWRC), the great annual event showcasing local governments and their achievements.

During the event, the cities of Sevilla, Lille, Freiburg, Porto and Florence have expressed interest in joining the initiative. They will sign the Accord’s political commitment and will set ambitious targets within two years to achieve specific environmental objectives and regularly monitor progress.”

A community of pioneers

The Green City Accord provides numerous advantages to participating cities, including increased visibility, access to technical expertise and funding opportunities, and membership of a community of peer-cities sharing experiences and best practices.

The initiative is being implemented by a consortium including Eurocities, ICLEI and CEMR, with the financial support of the European Union. CEMR will promote the Accord through its members to reach out to small- and medium-sized cities. To this end, we will also encourage our national associations to become supporters of the initiative.

If your association would like to become a supporter or if your city would like to participate, be sure to get in touch with Axelle Griffon (Axelle.Griffon@ccre-cemr.org) or the Green City Accord helpdesk (contact@greencityaccord.eu).