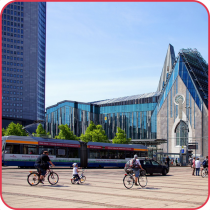 Territory matters! This is the message that national ministers sent this week with the adoption of the Territorial Agenda 2030 and the new Leipzig Charter on Sustainable Cities, during ministerial meetings from 30 November to 1 December.

The President of Emilia-Romagna and of CEMR, Stefano Bonaccini, and the Councillor of Tuscany Region and CEMR spokesperson on territorial development, Ilaria Bugetti, raised the voice of local governments alongside the European Commissioner for Cohesion policy and Reforms Elisa Ferreira and European Parliament REGI Committee Chair Younous Omarjee.

“It is good news to see ministers confirming their willingness to work together with local and regional governments on urban and territorial development,” declared CEMR President, Stefano Bonaccini.

What are the new agendas all about?

The Leipzig Charter makes sustainable cities a high priority for Member States of the European Union. While the previous document has inspired several of the EU’s urban policies since 2007, the updated charter identifies three angles to address sustainable urban development: the Just City, the Green City and the Productive City.

What’s more, through the Charter Member States recognise that local and regional governments need appropriate resources, capacities an legal framework in order to take action. This is a key achievement for CEMR.

The Territorial Agenda is a strategic policy document for spatial planning in Europe, its regions and communities. It provides a framework for action on territorial cohesion to reduce territorial disparities and ensure a sustainable future for all places regardless their size.

Although they cover different dimensions, the two documents complement each other and share principles. For example, both are aligned with the UN’s Sustainable Development Goal 11 on urban development and cohesion policy, and both promote the multi-level governance.

Why are they so important?

As CEMR spokesperson on territorial development, Ilaria Bugetti, stated: “The new Territorial Agenda could not have arrived at a better time, as we see we how the territorial dimension of major global crises is becoming so apparent.”

Undoubtedly, Europe is facing urgent challenges of territorial inequality and cohesion in areas such as demography, economy and youth unemployment- which varies from 4 or 5 % in some regions to over 50% in others. In the past months, the coronavirus has exacerbated such inequalities, as the virus spread more quickly in cities than in rural areas or the pandemic was particularly devastating for local economies reliant on tourism.

“The same decisions and the same policies can have a different impact on different place. And it is our responsibility to bridge this divide between general policies and their impacts on real people in real places, in real time”, said Commissioner Ferreira. All policies must be placed-based, especially for the post-COVID recovery.

When it comes to cities, there is undeniably a need to revamp the Urban Agenda for the EU, as an implementing tool for the new Leipzig Charter . Today about three quarters of the European population lives in urban areas and it is especially in cities where we face today’s most pressing challenges such as housing, pollution, traffic congestion or social inclusion.

“If we are to solve these problems, we must start with cities”, said Commissioner Ferreira. “But cities cannot do this alone […]. We need the resources and work not just of cities, but of national authorities and the European level. We must coordinate our efforts.”

In the coming months, CEMR will raise awareness on the need to involve cities, towns and regions in the design of national plans to ensure that they truly meet the needs on the ground.