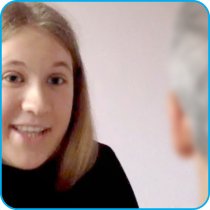 “If we take the advantage of the COVID-19 situation, we could modernise public administration in a way to finally come closer to the young generation, by using the channels and the language they use”, said Eduard Rivas Mateo, Mayor of Esparraguera (Spain, FEMP) and CEMR Spokesperson on civic engagement and citizens participation.

The Spanish mayor spoke at the online event “The role of youth in policy and civic participation” held yesterday (12 November) during the EU-Eastern Partnership Local Leaders’ Forum, organised by CEMR, PLATFORMA and the Latvian Association of Local and Regional Governments (LALRG).

While economies and administrations around the world are going digital, new technologies are also modifying decision-making processes and influencing the accessibility and accountability of public services. During the debate, young elected politicians, mayors, activists, start-up entrepreneurs from the European Union and Eastern Partnership countries shared their views and experiences of technology’s implications for democracy.

The participants also discussed good practices and various digital solutions for public administration and civic engagement. As a result of this fruitful debate, a few recommendations to enhance relationship between local governments and young citizens have been drafted by the organisers. The aim is to bring the topic on the agenda of the Eastern Partnership summit in March 2021.

Recommendation 1: Politicians should use digital tools to engage citizens

The Spanish Mayor’s call to change the relationship between the young citizens and their elected representatives was echoed by Wietse Van Ransbeeck, Co-founder & CEO of the Belgian CitizenLab, an e-democracy platform which allows cities and governments to consult their citizens on local topics and include them in decision-making: “COVID-19 is a huge opportunity for you to engage youth. Grab this opportunity to involve them, bring your meetings online and be more transparent and accountable.”

Irina Yarmolenko, City Councillor for Zhytomyr (Ukraine) and PLATFORMA spokesperson, also agreed, giving many concrete examples (such as online registration to kindergarten, public transport e-tickets or municipal apps) and speaking about an increase in transparency, accountability and safety thanks to the use of digital technology in local life. And Salome Ghonghadze, member of Lagodeki Municipal Council (Georgia), also presented similar actions taken by her municipality to develop further youth initiatives.

“In rapidly changing realities, young people are a major resource, in Europe and beyond”, said Marlène Siméon, Director of PLATFORMA. “They have an incomparable flexibility and drive to make changes. We shouldn’t forget they are the next generation of leaders.”

“Don’t underestimate their capabilities just because of their age”, said stressed Katarzyna Smętek, the 21-year old President of Youth Climate Council in the Polish Ministry of Climate. “Young people are not only generation of tomorrow but a part of today as they make almost half of the whole population.”  The young Polish activist called on politicians to incite youth to use technology in local democracy: “Local authorities should organise online consultations, virtual dialogues, interactive discussions to show them they are needed as main agents of change.”

Two mayors of different municipalities, Vladimir Prebilic of Kocevje (Slovenia – NALAS) and Haris Rokpelnis of Mazsalaca (Latvia – LALRG) addressed the problem of the generation gap in digitalisation. The younger the target audience, the higher the level of digital skills. Senior and underprivileged or vulnerable groups often lack computer skills or an  internet connection. Slovenia tackled this same problem by fostering solidarity in local communities to enable all to have digital equipment, leaving no one behind. And with transgenerational cooperation, using millennials with digital skills to train and educate not only schoolchildren but also older generations.

If we use new technology, we should be careful and ensure it is safe. Digital and media literacy are crucial to tackle the dark side of technology. On social platforms, disinformation, hate speech and fake news influence public attitudes and even political decisions, warned the Mayor of Esparraguera (Spain – FEMP), Eduard Rivas Mateo.

Nikolai Kvantaliani, EaP Civil Society Forum Steering Committee member and representative of the Belarusian association “New Group” added his own perspective from Belarus: “We are an IT country, lots of platforms allow government to be more transparent. They have everything in place – but the question is, it is used for a good or bad cause”, he said. “Our government is using this to impose power, for surveillance of opponents and young people.”

Beyond the threats, all agreed that e-government is emerging on all levels and politicians are using social media platforms, mobile apps and live streaming to engage with citizens in a direct way. Especially during COVID crisis the power of digital tools has been proven as the most useful. Not only to facilitate distance schooling, teleworking, socialising, also to prevent infections and save lives. This new window of opportunities shows how we might boost civic interaction and active participation differently also in the future.