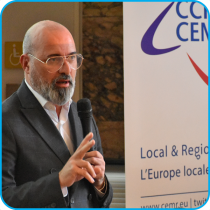 Stefano Bonaccini has been re-elected as president of CEMR for a second term of office of three years. CEMR’s new Policy Committee members voted in favour of the Italian regional leader as well as other members of the presidency during our recent gathering in Orleans. Bonaccini vowed to continue to lead CEMR as an organisation which defends local interests while tackling global issues.

“I will walk alongside all of you for a Europe based on the work of local authorities in a world that increasingly needs the commitment of the territories to solve the great issues facing humanity”, Stefano Bonaccini said.

Bonaccini has been CEMR president since December 2016, while also being president of CEMR’s Italian section (AICCRE). During his first term, CEMR took a leading role in promoting European values, notably by organising local citizen dialogues explaining the benefits of cohesion policy.

“We can say that thanks to the firm commitment of the CEMR and its national associations, the last European elections, where we feared the worst, have instead restored confidence in the idea of Europe,” Bonaccini said.

As CEMR president, Bonaccini’s priorities for his second term include:

Bonaccini has been president of the Emilia-Romagna Region since November 2014, an office to which he was also reelected last week for a second term. He has previously served as city councillor in Campogalliano, responsible for youth, sports and leisure, as well as Modena, where he was in charge of public works and historical heritage.