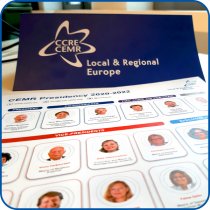 Europe’s towns and regions have a new leadership for the next three years! Check out our infographic.

At the first meeting of CEMR’s new Policy Committee on Thursday (23 January), mayors, councillors and regional officials came together to elect our Presidency. Both the Policy Committee’s and the Presidency’s mandates will extend to 2022.

The new Presidency is highly representative of Europe’s geographical and political diversity: 10 men and 10 women hailing from across the continent, east, west, north and south, including mayors, county leaders and regional presidents. The Policy Committee also elected CEMR’s spokespersons on various topics, the members of the Financial Management Committee and our internal auditors.

The new Presidency will take forward CEMR’s work for the next three years, notably on the reform of the EU, the Green Deal and the localisation of the Sustainable Development Goals. The Policy Committee meeting was hosted by the city of Orleans as part of its international “urban diplomacy” and co-organised by CEMR and our French association, AFCCRE.

The next great gathering will take place at the Congress of European Municipalities and Regions in Innsbruck, between 6 and 8 May, which is dedicated to the SDGs.

You can find pictures of the event in this online photo album.

The Policy Committee is CEMR’s main decision-making body. It approves, among other things, the budget, the annual work programme and the admission of new members. It is a political forum for European local leaders and a platform for towns and regions to exchange information and best practices. The Policy Committee is made up of over 170 local and regional elected representatives, who are nominated by CEMR's national member associations and sections.